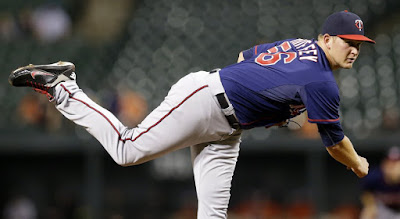 Tyler Duffey twirled his second straight impressive start for the Minnesota Twins as they took on the Orioles in Baltimore. The 24 year-old righty mowed down eight Orioles hitters, and he was on cruise control from the word go. As he's now made it two straight impressive starts, heads are starting to turn. The question is, should they be? And why wasn't Twins Territory already on notice?

Duffey was a 5th round pick out of Rice University by the Twins back in 2012. This season, he saw his first eight starts at Double-A Chattanooga, where he was the Opening Day starter. In and of itself that's noteworthy, considering it was Duffey (not Jose Berrios), that manager Doug Mientkiewicz gave the ball to kick off the season. He made that decision look wonderful as Duffey worked 6.2 innings giving up just four hits while striking out 10 Montgomery Biscuit batters. Since, he hasn't looked back.

On the season, Duffey has struck out eight or more batters in a game six times in 25 starts. He has 10 and 12 strikeout performances, and his eight strikeouts against the Orioles on Thursday night were the most by a Twins pitcher since July 5 when Ervin Santana sat down eight Royals. In his 25 starts, Duffey has given up more than three earned runs just five times, and he's held team scoreless ten times.

In 2015, the Twins have been aggressive with the consistently impressing Duffey. After pitching to the tune of a 2.56 ERA across eight Double-A starts (while owning a 9.3 K/9), Duffey found himself at Triple-A Rochester. The success came with him as he compiled a 2.72 ERA across 13 starts. After a tough first test at the big league level, it appears Duffey has arrived for the Twins too.

Starting against the Cleveland Indians and Baltimore Orioles, Duffey has put together 13.2 innings of impressive pitching. He's surrendered just 11 hits, two earned runs, and five walks, all while fanning 15 batters. Across those two starts, opposing hitters are batting just .224/.296/.265 off of him. By all early indications, it would appear as though Duffey is here to stay.

8.08, 6.44, 6.25, and 5.53 are the Twins current starters K/9 (May, Gibson, Milone, and Santana). Duffey finds himself the owner of a 9.19 mark through his first three big league starts. On a team starved for strikeouts, Duffey is providing the gold standard.

As he continues to see turns in a major league rotation, Duffey will only have a chance to get better. Currently throwing his hammer curve right around 30% of the time, the Twins have to be ecstatic about just how good of a pitch the former Rice Owl has at his disposal. Duffey is also getting batters to chase a healthy amount in generating swings at pitches outside of the zone just over 35% of the time. It's safe to say he's working into a groove, and making the game come to him.

A driven, motivated, and level-headed individual, Tyler Duffey has the opportunity to be a key cog for winning Twins teams in the years to come. Although not billed with the hype of other top pitching prospects, Duffey's performances are begging you to take notice all on their own.
Posted by tlschwerz at 7:35 AM