Thank You For 2015 Mike Pelfrey 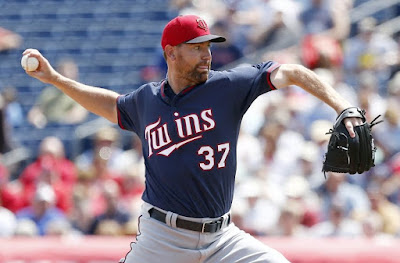 Now owners of the first winning season for the Twins franchise since 2010, Paul Molitor and the guys have had a very successful 2015 campaign. There's been rookies introduced, milestones reached, and even a 40 year old man competing at a very high level over the last month of the season. What there has also been, is a pitcher that is generally the butt of all jokes, giving Minnesota exactly what they've needed.

For that, thank you Mike Pelfrey.

Before the season began, Twins fans no doubt would be thanking Mike Pelfrey that the Pohlad's were only shelling out $5.5 million for his services this season (a very modest amount for a major league starting pitcher). They would be thanking him for this being the end of his three year run with the organization. Thankfulness would be shed on the fact that his departure would open the door for someone else to come take over. However, now with the season coming to an end, Pelfrey should be thanked for all of unexpected contributions he provided this winning ballclub.

Full disclosure, calling any contributions at the big league level probably isn't fair. You're being paid millions to go out and compete, your team expects that to happen at a level that puts them in position to win. However, with Pelfrey having ERA's of 5.19 and 7.99 in his past two season respectively, the expectations were no doubt going to be lowered.

Initially asked to pitch out of the bullpen prior to Ervin Santana's PED suspension, Pelfrey warmly accepted his assignment the Scott Boras climate was quick to voice his unhappiness. After all, he wasn't going to welcome the chance to leave money on the table heading into free agency (even if I am of the belief he has very good to elite relief potential). Regardless of how it took place however, Pelfrey was going to start, and that is exactly what he has done.

Making 29 starts for the Twins (with one remaining as of this writing), Pelfrey compiled a 4.09 ERA, the second best mark of his career. His 3.99 FIP (fielding independent pitching) tally is the third best total over his 10 seasons, and his 0.6 HR/9 leads the big leagues. He gave the Twins 163.0 IP (second on the club behind Kyle Gibson), while walking a career low 2.4 batters per nine innings. He will set a new career best walk total (currently 43) and likely will give up less than 200 hits for just the second time over the course of a full season. In short, Mike Pelfrey has been everything the Twins have needed at the back end of their rotation.

Although sometimes seen as a dangerous starter, and notably someone who hasn't gone as deep as would be hoped in games, the narrative goes the other way as well. He has given up two earned runs or less in 17 of his 29 starts, while pitching into the 7th inning or later in 10 starts. Compiling a 2.0 fWAR for Minnesota, he'll post the third best mark of his career.

One of the biggest obstacles for Pelfrey as a Twin has been his health. In 2015, he has thrown more than 100 pitches in 10 starts, staying healthy for the first time. The health boost has been noticeable in his ability as well. With an average fastball velocity of 93mph (2nd highest of career and best since 2007), as well as a sinker averaging 93.3 mph (3rd highest of career, best since 2012, Pelfrey's effectiveness has been no doubt boosted.

Following the final week of the season, Pelfrey will ride off into the sunset. Most Twins fans will still struggle with the undeniable tie Pelfrey has to injuries and ineffectiveness during his tenure here. However, in a season where the Twins came out of nowhere, it was Pelfrey that held things down every 5th day.

Knowing there's prospects on the way to take his place helps to ease the transition. The Jose Berrios and Alex Meyer's of the world are going to raise the floor of what the Twins expect a 5th starter to be. For 2015 though, it was Mike Pelfrey that did the job, and did so at a very respectable level.
Posted by tlschwerz at 11:22 AM