From Walls to the Hall: A Minimalist Masterpiece

Artwork has a way of inserting itself into pop culture, mainstream media, and especially sports. While there's an abundance of offerings in the world of art, it's the pieces in which we truly connect with that not only bring the work, but also the artist to life. There's been few people I've ever come across who embody these notions more than S. Preston, maybe better known as @PootPoot, or the Minimalist Stadium Guy. 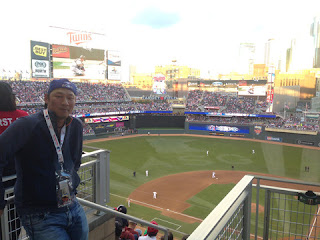 Preston's artwork first caught my eye near the entrance to the Metropolitan Club at the newly built Target Field. His Minimalist Stadium series was an undertaking that was so flawlessly executed, it's perfection was displayed in its simplicity. With displays throughout a host of Major League Baseball stadiums, Preston's art has been handed imparted to the masses.

As his popularity has grown, so have his offerings. What started out with stadiums, has now grown to Disney Ballpark Princesses, as well as Minimalist Mascots. The way in which he's been able to connect with fans, through his art, really continues to grow. What's most impressive however, is that it's that connection that has taken things to an entirely new level, even more so than the art itself.


“Create artwork that augments and connects sports fans to their deepest love for the game”- S. Preston

Despite being far from a goal when starting out his Minimalist Ballpark venture, S. Preston has reached the ultimate pinnacle in baseball circles. He, and well maybe more correctly put, his art, are now members of the Baseball Hall of Fame in Cooperstown, New York.

To understand how he got there however, you must first understand where he's been. Despite being a native Canadian, and now residing in California, Preston's tale begins in Minnesota. Having just been licensed by Major League Baseball, he displayed his Minimalist Ballpark collection at the All Star Game held at Target Field in 2014, and was met by people from all walks of life. Of those attending the show, a group from the Hall of Fame ran into him as well. In talking and understanding his work, those from the committee saw that Preston was as much about the work itself, as he was the connection to the great game of baseball that it provided. The groundwork had been laid.

As time went on, Preston continued to do exactly what he set out to do, use art as a medium to connect with baseball fans. It is in this practice that he's set himself apart and made buying and owning his art as much about the product, as it is about the person. He's social media savvy, connecting with fans throughout the Twitterverse. He uses his Ballpark Princesses as giveaways while at games. He's even made getting mascots behind the minimalist versions of themselves a serious goal. In short, Chuhon sees his art as part of a larger story that he's telling.

Based on that reality, the Baseball Hall of Fame seems to see the bigger picture as well. Calling up S. Preston shortly after his display at TwinsFest last winter (and imagine the level of excitement he had on that call, he tells the story with such exuberance), it was deemed that his artwork embodied significant parts of baseball history. The Hall of Fame had decided that Preston's Minimalist Ballpark collection needed to be included among the very few pieces of art that the museum now owns. He, err his work, was going into the Hall. 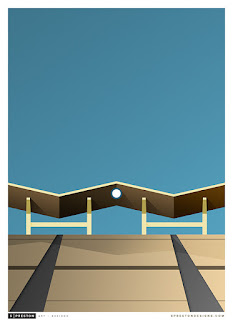 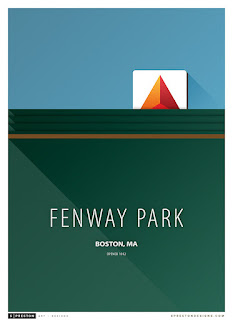 Throughout talks with the Hall of Fame, it was determined that the four oldest Major League Baseball stadiums would be the best pieces to welcome into the archives. Fenway Park, Wrigley Field, Dodgers Stadium, and Kauffman Stadium in all their minimalist glory were now providing Chuhon an avenue to sign H.O.F. behind his name. 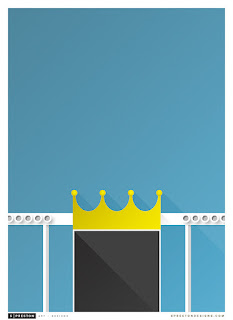 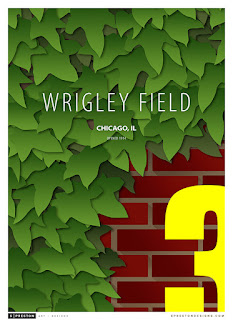 Unfortunately, S. Preston won't be getting a plaque or a bust of himself in Cooperstown any time soon, but his art's inclusion in the heralded Hall does provide some pretty cool benefits. Not only is he now among the very select few artists that ever see their work get accepted, but he is official a member of the Hall of Fame and it lasts for life. With his lifetime membership, and his work down in the archives, he is also afforded the opportunity to tour the archives, something the general public never sees, at his desire. While on a mission to see his art, the amount of baseball history he walks by and touches along the wall is equally as exciting. 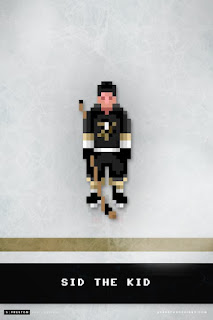 What's great about where S. Preston and his minimalist style, is that it's simply a by-product of where he's come from. A truly genuine person, his path to success is one he should be easily able to continue to replicate. In creating amazing works of art, he's opened a door. Because of how he uses Twitter and other avenues to connect beyond what's printed on a piece of paper, he simply can't be knocked off. As much as you may like his work, you buy equally because of who he is. It was what the Baseball Hall of Fame saw, what I have witnessed, and what you likely have as well.

This chapter is written, and the next one is starting. You can bet @PootPoot will have the next great thing up on his website for purchase soon, and this time, he can sign it "S. Preston H.O.F."
Posted by tlschwerz at 1:12 PM