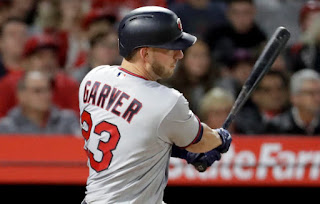 There’s no denying that the Minnesota Twins employed one of the best catchers Major League Baseball has ever seen. Up until the point that a brain injury forced him out from behind the plate, Joe Mauer was on a trajectory we hadn’t seen since Johnny Bench. Following the positional change, the organization has been starved for the next “it” factor behind the plate. Jason Castro has been the only designated long-term solution, but it’s an internally developed option that is at the doorstep of a breakthrough.

After getting called up for a cup of coffee in September of 2017, Mitch Garver enjoyed his rookie tour during the 2018 Twins campaign. Playing in 102 games as the backup to Castro, he split the work nearly right down the middle. Castro suffered an injury that left him playing just 19 games for Paul Molitor, and Garver ceded duties to veteran journeyman such as Bobby Wilson and Chris Gimenez. In the time that he was the guy, it seemed obvious there was talent to his credit, but a defensive liability had been holding him back.

Looking over some of the numbers, this was bore out in the data as well. Strike zone runs saved had Garver at -8, which was tied for third-worst among 86 catchers to log at least 100 innings behind the dish. His -16 DRS was better than only Nick Hundley across the same sample size, and ball skills were something that appeared to be an ever-present bugaboo. For however frustrating that may have been to fans watching on TV, you can bet Garver took it much harder.

In a recent piece The Athletic’s Dan Hayes and Eno Saris tagged teamed, Garver said, “Apparently, the people on Twitter realized I was the worst defensive catcher in the league, and they let me know about it — even though I already knew.” Minnesota now employs Tanner Swanson as their Minor League Catching Coordinator, and despite being a college coach previously, his impact is seen throughout the organization.

Over the course of spring training, many fans have wondered about the crouches they’ve seen from Twins behind the plate. With a focus on stealing more strikes, presenting a better ball, and providing the umpire a stronger vantage point, a highlight on each pitch has been the goal. Garver has worked plenty on his own over the course of the offseason, but his immediate development under Swanson has also drawn rave reviews throughout the organization as well. A step forward defensively gives us reason to wonder what’s next for the New Mexico product.

When the dust settled on 2018, Garver was worth 1.3 fWAR making him the 16th best catcher in baseball. Despite being a cumulative statistic, Garver was able to compile that tally in an injury shortened season, while being negatively impacted by his poor defensive play. That only goes to show just how important his offensive impact may be.

No matter what level of the system you look at, Mitch has always hit. His .679 OPS at Elizabethton during the first year of pro ball was reflective of a lacking power stroke. From there he posted an .880 OPS at Low-A and went on to tally an .815 OPS during his first taste of Triple-A ball. Before being promoted to the Twins, Garver rounded out his minors career with a scintillating .928 OPS across 88 games for Rochester. Whatever defensive deficiencies had been present on the farm, were certainly overshadowed by how well the bat had played.

Although a .749 OPS isn’t earth-shattering by any means, it was the 10th best number across baseball for backstops. He was just one point shy of Yadier Molina, and within legitimate striking distance of a top six mark across baseball. Mitch has always mashed lefties, posting a .938 OPS against them in his final Triple-A stint. With Minnesota last year though, he owned an .806 mark against righties, with just a .629 OPS against southpaws. Hitting just seven homers in 335 plate appearances, only on came off left-handed pitchers. If that doesn’t sound like opportunity, I don’t know what does.

Making loud contact with a hard-hit rate north of 40%, the opportunity for growth is there. Minnesota would like to see advancement on the 8% HR/FB ratio, as well as an increase in the fly ball and line drive outcomes. At just a 7.8% career swinging strike rate, and only a 22.4% chase rate, Mitch has the zone plenty honed in. The numbers suggest it’s about making the outcomes work more in his favor, using the inputs already at play.

Rocco Baldelli gets a backstop on the last year of a veteran deal in Jason Castro this season. Willians Astudillo is a fun swiss army knife that’s not an ideal catching option. Mitch Garver though, is the 1B to a likely platoon, that could take over as the starter and run away with the opportunity. Another year of acclimation at the plate makes the bat more than exciting, and if the defensive development is to be believed, the floor ends up skyrocketing towards the roof. You aren’t ever going to recreate a Joe Mauer type catcher, but Minnesota could have one of the better options in baseball if everything goes as planned.