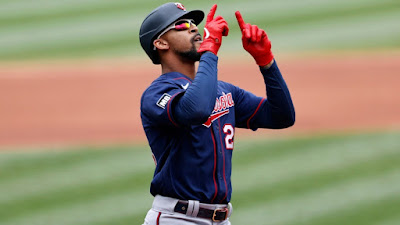 For months I have been tweeting that the Minnesota Twins need to pay Byron Buxton. There has never been a point at which that should have been anything close to an uncertainty. Today, it became reality.

The Twins centerfielder has received MVP votes twice in his career. He has an .887 OPS over the past three seasons, and he was barreling towards and MVP award prior to injury this past season. Therein lies the rub. Minnesota was only in a position to sign their superstar thanks to his injury history. Missing games is the reason Buxton wouldn’t have received the $300 million payday in free agency, and it’s the necessary push needed to negotiate an extension with the mid-market club.

A couple of weeks ago I wrote a piece for Twins Daily looking at the parallels between Buxton and Minnesota’s last mega-star, Joe Mauer. The hometown hero was paid $184 million because of his exploits prior to injury, and then denigrated in his later years because of them. On the flip side, Buxton is being shorted because of his injury history and leaves the Twins ample opportunity to experience value-based riches in the future.

Just two seasons ago this same front office paid a 34-year-old Josh Donaldson $100 million for four seasons. He’s dealt with chronic calf issues for much of his later career and they still took that gamble. Nabbing a 28-year-old star in Buxton for that same amount and tacking on an additional three years is nothing short of larceny.

We can go rounds as to whether Buxton is injury-prone or a byproduct of unfortunate circumstance. There was a time he was running into walls and his all-out style had him in precarious positions. Breaking a bone after being hit by a pitch or suffering a concussion following a dive onto grass certainly shouldn’t be assumed as indicative of future issues. No matter what happens, Byron would be the first person to wish for a clean bill of health, even while not being able to reap the rewards of a payday it would produce.

There’s been plenty of reason to question this front office and the noise that’s been made public regarding roster construction over the past few months. This extension alone was the largest opportunity to call the offseason a failure and is now done and over with. It’s time they continue to supplement around a lineup bolstered with talent, and that remains to be seen.

No matter what happens from here though, they paid the man.

Posted by tlschwerz at 2:15 PM 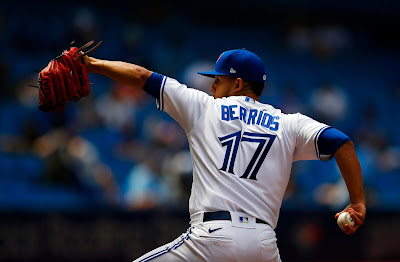 The Minnesota Twins dealt Jose Berrios to the Toronto Blue Jays during the 2021 Major League Baseball season. Today he signed a seven year deal worth $140 million to stay in Canada for the bulk of his career. The wound is opened again.

When the Twins flipped Berrios to the Blue Jays, they did a great job acquiring prospect capital. Austin Martin and Simeon Woods-Richardson are both top-100 prospects. Despite Martin looking more like a centerfielder than a shortstop, his talent still plays up the middle. Woods-Richardson will get a shot to re-establish himself after competing in the Olympics last season. If Minnesota wasn’t going to sign Berrios, then getting that type of haul was nice.

In seeing the deal get struck with Toronto, it’s very clear that Minnesota’s sticking point was the duration. As Darren Wolfson points out, the front office is not keen on offering seven year pacts to players. That’s a fair stance, even with someone who’s been as durable as Jose, and even though he’s just 27-years-old. What remains to be seen is how they will compete for those top talents otherwise. If you’re taking a hard and fast approach on avoiding length, then you must make a more aggressive push on value.

A $20 million average annual value for Berrios seems like a fair amount. That’s below what Noah Syndergaard will get, albeit on a one year deal, despite pitching just two innings since 2019. Should Minnesota look to mitigate risk by avoiding length, they’ll need to tack on a percentage above market rate to lure free agents into their organization.

We’ll very quickly get an idea how this plays out for Derek Falvey and Thad Levine. Ultimately, they “saved” the money on Berrios by flipping him for outstanding prospects. Instead of breaking up the $20 million annually across two or three pitchers, they must be willing to spend that type of coin on one arm that fills the void. They’ll be hoping the length of the deal is shorter, but banking that salary flexibility, or trying to patch it together through multiple players is not something that should be met with praise.

As I’ve harper on for months, this offseason is going to be the most important in determining the true ability of the front office, and they should be judged accordingly.