Buxton Extending Into the Future 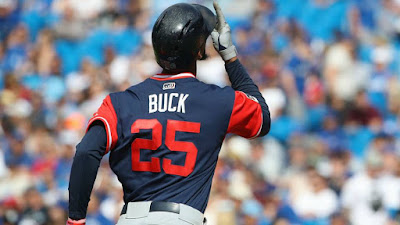 Over the weekend, Jim Bowden of The Athletic tweeted that the Minnesota Twins and star centerfielder Byron Buxton have a mutual interest when it comes to figuring out a long-term extension. Quickly, local names like Mike Berardino and Darren Wolfson noted that while true, that's quite a ways from happening. Although things could come together quickly, it's worth wondering what a deal may look like, and whether or not it makes sense for both sides.

As players like Byron Buxton, Miguel Sano, Jose Berrios, and some of the other developing youngsters push towards extensions, the Twins crossroads is an interesting one. It's at the end of 2018 that star second basemen Brian Dozier sees his four-year, $20 million extension run out. As John Bonnes from Twins Daily reported last week, the Mississippi native believes he's headed for free agency. Minnesota wasn't able to buy into Dozier's free agency years, and retaining him now would require a new deal to be worked out.

For a player like Buxton, the ideal scenario for the Twins would be to lock him up for a considerable amount of time. Obviously on Byron's end, he'll be foregoing arbitration induced pay raises, and will want to be compensated fairly. At 24 years old, and arbitration eligible for the first time in 2019, the clock is ticking. When looking for some level of comparison, another young outfielder comes to mind.

Although Betts doesn't play centerfield, he's a decent case study when it comes to Buxton. Betts won his second straight Gold Glove for the Red Sox in 2017, and posted his fourth straight season with an OPS north of .800. Across all of baseball, only Betts had more DRS (31) in the outfield than the Twins Buxton (24). The Red Sox right fielder's UZR more than doubled the Twins centerfielder's, and his RngR factor also checked in slightly higher. The breakout was hardly a one year thing either, as Betts posted dazzling digits across multiple defensive metrics in 2016. Even before reaching tallies of 32 and 31 DRS the last two years respectively, Betts owned marks of 5 and 10 in his first two seasons.

On the offensive side of the diamond, there's little argument to be made that Betts hasn't been the far superior player. In his worst season, an .803 OPS still shines amongst an All Star caliber resume, along with a third straight year of MVP votes. For Buxton, the .728 OPS in 2017 showed part of the promise that made him the number on prospect in all of baseball, but it was still an early season swoon that weighed down his overall numbers.

For Buxton to reach the overall impact that Betts has for the Red Sox, Minnesota will need to see a full 162 games worth of the .796 OPS tallied from June 1st through the end of the season. As Buxton legitimately broke down his swing and rebuilt it at the big league level under James Rowson a season ago, it's an expectation that doesn't seem too incredibly lofty. What is an All Star candidate based upon a lackluster OPS and his glove alone, is an MVP threat for multiple years in a row when reaching his peak potential.

So knowing they similarly stack up, Betts is a bit further into the process of being paid. While having not been extended by the Red Sox, he's seen raises from $514.7k to $566k, and then further to $950k a season ago. Being arbitration eligible for the first time this season, Betts' case went to a hearing. The Red Sox offered him $7.5 million, while he believed in being worth more. After having the case heard, the outfielder came out on top and will make $10.5 million in 2018. Over a 10x increase on his 2017 salary, Betts has three more years of arbitration induced salaries before he'll hit free agency.

That $10.5 million Betts was awarded comes in as the second highest salary for a player in their first year of arbitration eligibility, and it was only beaten by Kris Bryant in this same offseason ($10.85m.) It was in this same offseason that Blue Jays third basemen Josh Donaldson set the record for the largest arbitration contract in history, checking in at $23 million. Toronto had worked out a deal to give Donaldson cost certainty each of the past two years with a deal that paid him a total of $28.65 million. Having run out the year before he hits the open market however, the new number is a hefty one.

What the numbers above suggest is that Byron Buxton could have the Twins in a place where they see some really inflated numbers rather quickly. After making $535k in 2017, Buxton's increase is a modest one to $570k. This is the last deal that will be consummated without the intervention of the arbitration system unless a long-term agreement is struck however. If Byron continues to let nothing fall but raindrops, and the bat is in the place it appears to be, the dollar signs should roll in rather quickly. Minnesota could be looking at numbers like $8m, $10m, $12m, and 15m over the course of the next four seasons. Having yet to earn a seven-figure yearly salary, the Georgia native could be staring at the business end of $45 million in a few short years. While that would still pale in comparison to the value he'd bring in that scenario, a more economically focus route could be beneficial for the Twins.

The current front office wasn't in place when Minnesota agreed to keep Brian Dozier around for $20 million over the course of four-years. That being said, this astute collection likely sees the value in a similar cost-certainty model for their superstar centerfielder. Dozier was 28 at the time of his first multi-year deal, while Buxton just turned 24 last December. There's plenty of factors at play, but the numbers seem to suggest that giving up a sense of certainty for a level of security is a good play for both sides.

I'm not entirely sure what the numbers would look like, but something like $30-35 million through four years of arbitration could be a nice get for all parties involved. No matter what the dollars say however, it appears to make sense, for both Buxton and the Twins, to pencil each other into plans for the immediate future.
Posted by tlschwerz at 9:50 AM