Is the Twins Narrative Really “Punting on 2019?” 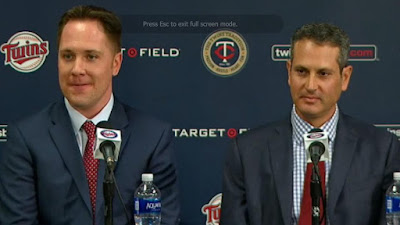 For weeks we’ve seen news outlets and beat writers suggest that the Twins have instructed them the focus for 2019 has been in seeing what Byron Buxton and Miguel Sano bring to the table. In a sport with a 25-man roster, the front office has trotted out a narrative that suggests the year ahead rests solely on the shoulders of a once promising duo. The reality in all of this is that same suggestion could be turned in to Minnesota punting on the season ahead, and the constructs of that suggestion remain relatively similar.

When 2018 ended the Minnesota Twins were done paying Joe Mauer $23 million a season for a contract that he easily earned. Regardless of whether or not he retired, the organization had no substantial money committed anywhere for either the year ahead or those to come. Given that situation, the hope was that the front office would find a way to allocate dollars and acquire talent for the road ahead. New faces have been brought in, but the reality is that the finished product looks like a half-hearted job.

Pitchers and catchers report to Spring Training this week, a point in which the offseason was generally seen as concluded. Last season we watched as Lance Lynn and Logan Morrison joined the club after that point, and in 2019, the top three free agents are still homeless when it comes to a team for the year ahead. Although a significant amount of deals have been done, there’re impactful moves for plenty of organizations still to take place.

In Minnesota, Derek Falvey and Thad Levine essentially have sat on their hands and suggested they’re good with “just enough.”

Right now most projection systems have the 2019 Twins tabbed for somewhere in the mid-80s as a win total. With Cleveland coming in about 10 games higher than that, the division certainly will go through the Indians once again. Given the steps back Terry Francona’s team has taken on paper however, it’s beyond disheartening to see Minnesota giving up on an attempt to make things interesting.

There’s currently a $30 million deficit between year-over-year spending. Sure this market will never compete with the biggest in baseball, but the $128 million bill for the 2018 squad was hardly breaking the bank for anyone connected to the Pohlad’s. It was a reach to call it league average, and the revenues generated were still enormous. Given the payroll constraints for the current season and the next one, Falvey and Levine could legitimately pay any free agent $30 million on a one-year deal, or $60 million over two to join the Twins today.

You’ll hear the retort that players have to want to come to the Twins, but it’s a suggestion that should fall on deaf ears. That premise operates under the guise that Minnesota is being turned down despite being the highest bidder. Last offseason Yu Darvish was the apple of the front office’s eye, and they lost out after failing to match the years in Chicago. Obviously that’s a bullet dodged today, but Minnesota got beat by themselves as opposed to an offer that genuinely allowed the player to weigh a possibility. Yasmani Grandal signed with the Brewers this winter on an extremely friendly deal, and while the Twins were “interested” and made an offer, things never went anywhere.

So many things went wrong in Minnesota a season ago, and chief among them were the regression of Byron Buxton and Miguel Sano. The club still ended up winning 78 games in an equally bad AL Central and is operating as if that’s the expectation for the year ahead. If Minnesota’s front office sees this team as a 75 game winner, then there’s no amount of free agent firepower that will close the gap. As an 80 win team banking on a rebound by former top prospects though, choosing to balk at more talent is irresponsible.

Adalberto Mejia may start in the bullpen. Fernando Romero may transition to a reliever. Matt Magill could be the 25th man, and Rocco Baldelli could be served with a pitching staff filled with question marks in the season ahead. Or, those sitting atop the org chart at 1 Twins Way could throw their remaining cash at Keuchel, Kimbrel, Gonzalez or some other assets that sets things on a better foot, and we could let the chips fall where they may.

If and when this season goes sideways, the front office can point back to suggesting they were waiting on Buxton and Sano. In reality, everyone is starting with a clean slate, and no one did less to capitalize on theirs than those in charge of righting the ship at Target Field.
Posted by tlschwerz at 11:14 AM