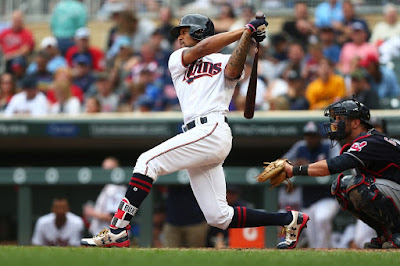 As the door closes on the first half of the 2019 Major League Baseball season the Minnesota Twins sit in sole possession of first place in the AL Central Division. They have a 5.5 game lead over the favorited Cleveland Indians and find themselves with Postseason odds north of 96%. This drastic turnaround is because of the work both Rocco Baldelli and the front office has put in, but one player on the field has made an incredible impact as well.

After being cast aside by plenty of Twins fans due to failed expectations thus far in his career Byron Buxton has emerged as a national presence. Losing virtually all of 2018 due to injury, Buxton returned this year with plenty to prove. Still just 25 years-old it was undoubtedly weighing on him to make this the breakout campaign. The Athletic’s Dan Hayes provided some great insight into Buck’s offseason and it appeared those words had some serious weight behind them.

To this point Buxton has played in 73 of the Twins 89 games. He has missed some time needing an IL stint, but his 2.5 fWAR ranks third among hitters on the club. In over 235 at bats he has an .816 OPS, will hit double-digit homers, and is on pace to set career highs virtually across the board. Offensively Buxton has arrived. Likely never projecting as an average hitter, inching closer to .270 with sneaky power is where he’ll ultimately settle in. Combining that with his defensive profile makes him an irreplaceable asset.

It’s because of that combination that naming anyone else the Twins first half MVP seems like a misstep. Buxton has been worth 10 DRS this year (2nd in the American League) and trails only Victor Robles and Kevin Kiermaier in Outs Above Average (10). He’s made more five-star outs than anyone in baseball and it’s visually obvious how impactful he is patrolling centerfield.

Even if Baldelli had better options to run out while Buxton was shelved, the ripple effect was always going to be felt. Max Kepler is in the midst of a breakout season as well, and defensively he’s been an incredible asset. Moving him to centerfield worked out wonderfully during Byron’s absence but you cannot simply replace someone as valuable as the Georgia native is.

Right now, the Twins have multiple All Stars, a pitching staff among the best in baseball, and a lineup that’s providing thump at an otherwise unseen pace. Despite all of that, it’s the 9-hole hitter that makes his presence felt most with his glove, who’s consistently provided a level of value propelling the Twins to their current standing.

We’ve waited nearly five years for this to all come together and seeing Byron do it on a team that’s now so good has been enjoyable to say the least.

Posted by tlschwerz at 1:45 PM