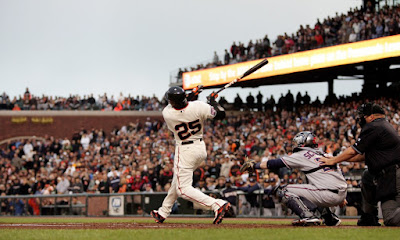 It's that time of year again. The time in which we see the end of season baseball awards announced. More importantly though, it's when we begin to see those special and oh-so revered individuals among the Baseball Writers Association of America reveal their Hall of Fame ballots. It's also the time of year best served to remind you you're probably wrong about PEDs, and that's ok.

Before delving deeper into what is viewed as a controversial topic (it really doesn't need to be), I want to give you a theme to ponder throughout this journey: "Performance reigns supreme." The quantifiable totals of what has happened before, in relation to what may happen in the future, is quite possibly the best unit of measurement in sports. Now to bring in some context, let's dive in.

This year, as with the one before it, and those before that, you will likely see some BBWAA writer proudly share his ballot on Twitter or some other social media avenue. He'll proudly proclaim he's voted for just eight players (with 10 being the accepted maximum), leaving off the likes of Barry Bonds or Roger Clemens. You may see someone else do the favor of voting in Alan Trammel (which is likely warranted), while boasting a snub of convicted felons, er PED users, Bonds and Clemens. In short, you'll watch as a handful do it all wrong.

Among many, there is a belief that the Hall of Fame is a sacred place among baseball lore, and accepting anyone linked to performance enhancing drugs would be the first, final, and only way in which to taint the museum. In baseball terms, that thought process couldn't be more outside.

Forget the fact that Hank Aaron resides in the Hall of Fame (he took amphetamines during his playing days). Let's overlook that Babe Ruth didn't play the game against some of the best athletes the sport had to offer (Jackie Robinson didn't break the color barrier until April 15, 1947, nearly 12 years after Ruth retired). We probably shouldn't shed light on the fact that 146 of Lou Gehrig's home runs came during a period in which the game was played dramatically different (during the live ball era). Honestly looking back through history, each previous era should be discredit for being just that, a previous era.

No. Baseball in and of itself is a sport that celebrates it's past. America's game is a National Pastime because of it's evolution, and it's relevance through the years. The sport reinventing itself has allowed for the growth and continued admiration shown towards such a beautiful game. To go back and negate the game for what it was is a detriment to the history that the Hall of Fame is supposed to be celebrated for.

For whatever good or bad you'd like to attribute to it, the Steroid Era was. Just as amphetamines, racism, live balls, dead balls, and a host of other ways in which the game was played, baseball ushered in a new era. In fact, because of Bud Selig's decision to turn a blind eye to the era that produced some of the most homer filled seasons in history, the sport may be at an all time high.

The year was 1994, and for the eighth time in the history of the game, worked ceased. On August 12, 1994, the season was cancelled, the World Series was skipped, and baseball had endured its fourth work stoppage in the past 22 years. No doubt an uphill battle to regain popularity, the sport needed something, and the next era was about to provide it.

Fast-forward to 1998, and dub the season the year of the long ball. Mark McGwire and Sammy Sosa took baseball fans on a journey that is still fresh in their minds. Trading leads back and forth, Roger Mari's single-season home run record was in both of their sights. Eventually, both players would top the heralded 61 total, and McGwire would set a new bar with 70. The sport once again became must see action, and fans around the country made sure not to miss an at bat by either player. With a super-human look to them, McGwire and Sosa had ushered in the newest era.

Since then, players like Bonds, Clemens, Rafael Palmeiro, Alex Rodriguez, and a host of others have been linked to PEDs. Still in todays game, players are handed out suspensions on a near yearly basis. With a need to revitalize the sport, Bud Selig had turned a blind eye to a medical enhancement that allowed for the game to be played at an even higher level. Shutting that door is not an easy task, but it's also one that should not be retroactively punished.

The suggestion is not that there's a ton of players who have used or been linked to PEDs that belong in the Hall of Fame. However, there is no doubt that there are those who have, and belong. Clemens is one of the best pitchers the game of baseball has ever seen. Bonds is the home run king, and played every phase of the game at an incredibly high level. Their achievements are something to be celebrated, and there's no better place for that than in Cooperstown.

At some point, both players should (and likely will) get in. It may take the BBWAA ushering in a new wave of writers, continuing to flush out the past, or an understanding of a new thought process. Whatever the case may be, baseball is a sport that should be celebrated for all of its parts. Past eras have brought the game to where it is today, and trying to change that history only further separates the game from its roots. You can disagree with who a player is, what they stand for, or how they carry themselves. Trying to disagree with how the game was played, and what was achieved is a different story.

We've moved on from the steroid era, and the future is yet to be written, but the past needs to be celebrated in bronze.
Posted by tlschwerz at 7:37 AM