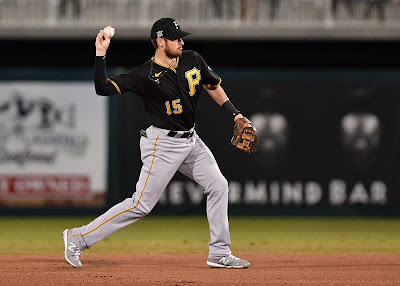 In 2021 the Minnesota Twins are going to have a new starting shortstop. Despite being delayed to camp, Andrelton Simmons will assume that role shortly. What happens behind him remains a question, but the Riddle could actually be the solution.

Alright, enough with the puns, sorry about that. Andrelton Simmons is as clear of a defensive upgrade as it gets. Even if Minnesota employed someone other than a below-average Jorge Polanco as short in recent seasons, Simba as he’s known, has won a Platinum Glove. Despite being in on Marcus Semien (who’s also a defensive upgrade), it’s clear prioritizing defense was a goal. Now with Simmons, the Twins have arguably the best defensive left-side of the infield in all of baseball. The man needs days off, though right.

Simmons opted out of 2020 after an injury, and he played in just 103 games the year before that. Even when he’s played in 145-plus, there’s still days he’ll need a break. A year ago, that may have fallen on the shoulders of Ehire Adrianza (as Marwin Gonzalez is not a good defender at short). In 2021 the options are less clear. Do you cloudy the transition for Polanco by moving him there intermittently? What about new utility man Luis Arraez filling in out of position? Right now, that’s where the options cease when it comes to clear Opening Day roster candidates.

The former Marlin and Pirate is not much to speak of at the plate. He owns a career OPS of just .616 and the minor league track record doesn’t suggest a breakout at age-29. What he can do however, is field. In just under 700 innings at short for the Marlins a few year ago, he was worth 12 DRS. That defensive ability is something only Simmons possesses among the Twins logical candidates. Welcome to your inside track sir.

Whether you assume Alex Kirilloff is the Twins Opening Day left fielder or not (he should be, and his outlook just got better), at worst that makes Arraez a utility player. Adding another outfielder to the bench could be an avenue, and a third catcher has been a preference in recent seasons. Jake Cave could still fit depending on the pitching configuration, and regardless of the flexibility, Willians Astudillo is redundant.

Penciling in Riddle with a Major League roster spot is hardly ideal. There are only 26 openings and there’s better talents. His effectiveness as a true shortstop could present him an edge though. The front office brought in Andrew Romine as a camp option for short with Simmons lagging behind. Maybe Riddle is seen with more of a future than just a ticket to Triple-A St. Paul. Nick Gordon isn’t viewed as a shortstop anymore, and even a healthy Royce Lewis wasn’t going to back up a big-league position. Even the best teams have guys that play a small but significant role, maybe this one is for J.T.

I don’t know that I love it, and I’m obviously not certain it will happen, but I think there’s a pathway to get there and one that makes logical sense.

Posted by tlschwerz at 3:39 PM