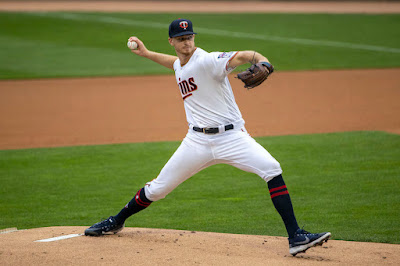 The Minnesota Twins have slogged through a dismal 2021 in large part due to an inability to find consistent pitching. With a starting rotation now entirely flipped on its head, finding a silver lining may seem difficult, but I encourage you to dream on Bailey Ober.

During his first Major League Baseball draft as the Twins President of Baseball Operations, Derek Falvey’s club selected Ober in the 12th round. Ober was a 21-year-old pitching for the College of Charleston and threw 28 innings for Elizabethton during the summer of 2017. In 2018-19, Ober rose the ranks from Single-A to Double-A and finished with a 0.38 ERA across 24.0 IP for Pensacola. The strikeout numbers were gaudy, and the walk rate was stingy.

At 6’9” Ober has the uncanny ability to get on an opposing batter with quickness. His average fastball velocity this season has been just 92 mph, but with such a long stride the pitch is being delivered much closer to 50 feet from home plate. The year with no minor league action certainly didn’t help a guy needing innings due to injury, but it’s clear that he’s put in work.

Despite the Twins needing to call on Ober sooner than they may have liked; he also forced their hand by owning a 2.81 ERA across his first 16 innings of work for Triple-A St. Paul. What we can easily see in the track record is that there’s never been a point at which Ober wasn’t a dominant force on the farm. The only knock on him thus far has been his availability, or more succinctly, his injury history.

Now over 63 innings into his Major League career, we’re seeing the same type of results that have become the expectation thus far. A 4.38 ERA through 14 starts is hardly anything to scoff at, but it’s an even more impressive 3.46 through his last eight turns (39.0 IP). Ober’s bugaboo thus far has been the longball, giving up 14 in his time with the Twins, and a 2.0 HR/9 that seems certain to normalize. He has maintained the strong strikeout rate (9.2 K/9) and continued to limit free passes (2.3 BB/9).

Understanding that this is Ober’s initial run through a big league gambit, it’s fair to assume we haven’t seen the best of him yet. He’s still learning the opposition, and of course the league will be given a chance to adjust to him as well. Although the Twins have been dealt multiple blows in the rotation this year, allowing Ober to showcase his stuff is something that should provide plenty of excitement for Minnesota fans.

As has been the case over the course of his career to this point, keeping Ober healthy and on the mound is the next must for the organization. Maybe he gets shut down soon having now reached a career high in professional innings pitched during a single season. That isn’t a bad idea given where the season currently stands, and it still allows the heightened hurler plenty to build off of for 2022. It’d be hard to see a scenario where Ober isn’t in the rotation on Opening Day next year, and that should be cause for more excitement than concern.

Posted by tlschwerz at 8:50 AM