In The End, The Twins Fail Kennys Vargas Most 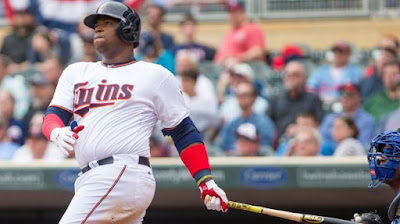 The Minnesota Twins dropped yet another series today, this time at the hands of the NL Central Cincinnati Reds. Looking to take the rubber match against staff ace, Johnny Cueto, runs seemed as though they would be few and far between. With a lackluster lineup to start, Minnesota did themselves no favors throughout the contest. At the end of the game it was Kennys Vargas who took the fall with a demotion to Double-A Chattanooga.

But really, is Vargas to blame at this point?

Following an impressive performance at the Future's Game in 2014, the Twins called up the first of their hyped prospects in Vargas. Despite not having the ceiling of a Miguel Sano or Byron Buxton, he was supposed to give fans something to latch onto. A big bodied, "Baby Ortiz," Vargas profiled as a middle of the order slugger. With 59 minor league home runs under his belt, the jumped from Double-A was made.

2014 was up and down for Vargas with the Twins, but slashing .274/.316/.772 in your first 53 big league games is nothing to scoff at. Throw in nine home runs and 38 RBI and the Twins had to be impressed with their young prospect. Unfortunately, 2015 was a different story for Vargas.

Out of the gates, Vargas was forced to compete for the designated hitter role. Not being a good fielding first basemen, Vargas would battle for at bats with players like Torii Hunter and Joe Mauer on their off days. As the main DH, the Twins expected Vargas to provide the pop in the heart of the order. Getting off to an ugly .172/.232/.234 start in the month of April, Minnesota's patience was growing thin.

As the calendar turned however, so did Vargas.

May rolled around, and Kennys Vargas exploded to a .366/.395/.561 slash line. He contributed two home runs and six RBI through May 17 and he looked to be turning a corner. Then it happened, out of nowhere, the Twins sent Vargas back to Triple-A. Claiming he wasn't providing the power or run support they expected, Terry Ryan and Paul Molitor sent the slugger back for some seasoning.

Undoubtedly, Vargas needed to chase pitches less, and he had to get a better handle on offspeed stuff, but the timing seemed odd. At the height of a hot streak, Minnesota felt Vargas was best served with his first trip to Triple-A. Vargas took the demotion in stride, and he hit his way back to the big leagues. Unfortunately, not everything remained the same.

Being brought back up to the big leagues on June 8, Vargas had to regain his rhythm that the club snatched away from him. 17 games went by, and Vargas slashed a paltry .235/.235/.373 with 17 strikeouts and no walks. He did homer twice and drive in five runs, but the player that was in May, seemed all but lost. After going 1-3 with a strikeout against the Reds and Cueto, the Twins had seen enough.

Now headed back to Double-A Chattanooga, the Twins and Vargas are both left thinking what if? What if they wouldn't have messed with a power hitter in the midst of a hot streak? What if they would have stuck it out a little longer? What if Vargas wasn't promoted, to then be sent down two levels and further damage his confidence? It all remains as a handful of what ifs.

For both Vargas and the Twins, salvaging whatever is possible in the shortest timeline has to be the goal. I'm not sure I see Vargas as much more than a bench bat long term anyways, but there's not a worse path that the Twins could have taken to get there.
Posted by tlschwerz at 1:12 PM