Twins In For An Overhaul 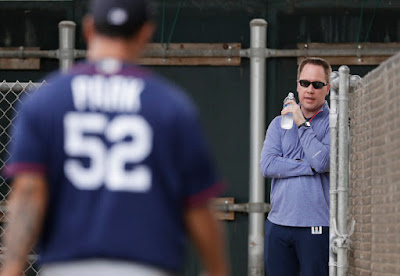 With just a couple of weeks left until Opening Day, the Minnesota Twins will be whittling down their players in camp and aligning the 40 man. What that means for a team with no spots left on the 40 man roster, is a handful of hard decisions lie ahead. The interesting bit for the new regime, is that it appears there are more moves than initially were to be expected.

Although the active 25 man roster can remain in flux through the first few weeks, Derek Falvey and Thad Levine are going to need to make decisions on who they want to hang onto. With so many new faces coming into the picture, there's going to be some holdovers that find themselves out of luck. Shuffling the 40 man and sending guys to the minors, or looking for a different organization, is never an easy or fun task. From where I'm standing though, it seems there's plenty of work ahead.

First, let's take a look at the guys likely needing a spot:

When the Twins signed Breslow this offseason, much was made about how he had reinvented his arm angle and pitching philosophy. Taking an analytical approach, Breslow broke down his mechanics and remade himself to suit his current ability. He's looked plenty capable this spring, and gives Minnesota a solid lefty presence in relief.
Chance he makes the club: 85%

Vogelsong hasn't been great this spring, and he's been largely mediocre since 2012. However, with Trevor May going down, I could definitely see the Twins going the easy or safe route with the 5th starter. Both Adalebrto Mejia and Jose Berrios still have options, and given the usage needed from a 5th starter, Vogelsong wouldn't have to take the ball incredibly often. Should Minnesota go this route, I'd look at it as settling, and really, an unnecessary 40 man move. However, reports are beginning to suggest it looks likely, and he'll need to be accommodated.
Chance he make the club: 80%

Despite how good Mitch Gavrer has shown this spring, the reality is that there's a big jump from Double to Triple-A, and even further to the big leagues. Gimenez seems locked in now as the backup catcher, and his familiarity with both Falvey and Levine from previous organizations helps. He's a solid veteran presence, and has been on some really good ballclubs. He doesn't do anything incredibly well, but he's a serviceable backup to Jason Castro and allows the Twins time to wait on Garver to develop.
Chance he makes the club: 95%

Before spring training started, Park was jettisoned from the 40 man. He went unclaimed on waivers and was brought into camp still competing for a DH job with Kennys Vargas. I have wondered if Vargas wasn't given this move as a vote of confidence that he was the lone 40 man DH, but he's done little with it. Park has looked solid at the plate this swing, both with the approach (6/4 K/BB) and the results. On top of that, he's the better fielding first basemen, and really gives the Twins a higher ceiling bat. I don't see Vargas as much more than a bench bat long term and think Park has earned his way back in.
Chance he makes the club: 60%

Stubbs inclusion is an interesting one, because it largely depends on how the Twins view Robbie Grossman. They are both solid OBP guys, but it's Stubbs who swings and misses (and has been ineffective in general) much more often. The one dynamic playing to Stubbs' strength is his ability to play all three outfield spots. Grossman is a corner guy only, and average at best. If the Twins want to have a more dynamic fourth outfielder, they could decide to go this way. However, teams shouldn't be beating down Stubbs' door, so Minnesota could likely hold him at Triple-A as well.
Chance he makes the club: 10%

With this construction, we have at least four guys needing 40 man spots, with a potential fifth. Right now the Twins find their 40 man at capacity, so what gives?

This is the easiest move for the Twins to make to clear a 40 man spot. May is done for the year after suffering a torn UCL. He'll likely need Tommy John surgery, and it's a certainty he's placed on the 60 day DL.
Removed from 40 man: 100%

Including Boshers here isn't a slight to him, but more of a roster crunch. Assuming Breslow makes the club, the Twins are going to carry a max of one more lefty reliever. That leaves the group of Taylor Rogers, Ryan O'Rourke, and Boshers vying for that spot. The first won't be removed from the 40 man, and both Boshers and O'Rourke could find themselves out in the cold.
Removed from 40 man: 50%

First, see above. Then realize O'Rourke is a dominant LOOGY but is rarely used solely in that instance, and is 28. He's been passed through waivers before, and likely would go unclaimed again. Regardless, I think it's a coin flip as to what happens between him and Boshers, with the slight edge going to Buddy.
Removed from 40 man: 51%

At this point, Perkins presents an interesting case. He's on the path to recovery, but his exact timetable for return remain a mystery. He needed his labrum literally reattached to the bone, and I doubt his overall effectiveness going forward. For the time being though, Minnesota could open up a 40 man spot by stashing him on the 60 day DL.
Removed from 40 man: 25%

Out of options, and probably on the outside of the pen looking in, Tonkin could find himself looking for a new team. He was improperly used in 2015, and then did little with his opportunities a year ago. With Rule 5 pick Justin Haley in the fold, as well as newly signed Matt Belisle, there's maybe not enough room in the Twins relief corps to accommodate Tonkin. He could clear waivers, but I don't think the Twins view him as must keep material.
Removed from 40 man: 60%

This spring, Santana has been used all over the place, and he's played quite a bit. I'm starting to try and convince myself he's being used as the guy who gets breaks in for teammates. At this point, he's a utility man that can't play any position above average defensively, and his bat has never been anything close to the inflated BABIP number his rookie year lulled many into thinking. With Ehire Adrianza the superior fielder, and Eduardo Escobar a better all around player, Santana ends up being a roster casualty out of options.
Removed from 40 man: 90%

Of those included, Grossman is probably the least likely to be going anywhere. He's completely tied to Drew Stubbs and how that situation plays out. I'd view them as an interchangeable duo, and only one stays. If Minnesota keeps Grossman, they'll try to hold onto Stubbs on the farm. If it's Stubbs, Grossman will likely look to latch on elsewhere.
Removed from 40 man:10%

With that breakdown, we have seven candidates that could create room for four or five 40 man additions. The Twins are still a ways away from needing to have answers, but the guys on the bottom list are absolutely going to be considered to make way for those above them.
Posted by tlschwerz at 7:21 AM