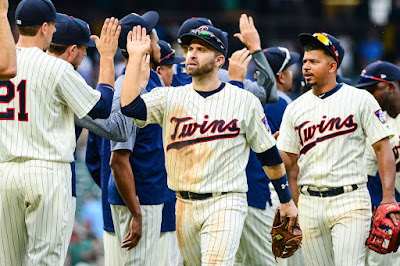 With just a handful of games left in the 2017 Major League Baseball season, the Minnesota Twins find themselves with a hold on the 2nd Wild Card spot. As of September 13, they have a 2 game lead over the Los Angeles Angels, and this is their race to lose. That means, in the matter of a few short weeks, they're staring at a matchup with the Bronx Bombers. Really though, is it all that scary?

The way each of their schedules sets up, Minnesota finds themselves in a much more enviable position than the Angels down the stretch. With the assumption that the Wild Card lead only continues to grow, let's allow for the possibility to get ahead of ourselves. To kick off Postseason play, Paul Molitor's squad has a one-game playoff with Joe Girardi's Yankees.

This isn't the Twins of the early 2000's, and many things have changed. Ron Gardenhire isn't in the dugout for Minnesota, and there's plenty of reasons to believe that this club can get the proverbial monkey off of their backs. With one series left against each other this season, the Twins currently hold the advantage over New York by a 2-1 margin with a +4 run differential. Pulling out all of the stops however, there's a few things we can look at. So, how does Minnesota stack up?

On the bump, it's almost assuredly going to be Ervin Santana for the Twins. The Twins ace hasn't faced New York in 2017, with his last tilts against the Yankees coming in back-to-back outings a year ago. Split between home and the road, Santana posted 12.1 IP with a 2.19 ERA and a 6/2 K/BB in starts on June 19 and 25th. Looking at both of those lineups, only half remain in New York. With the emergence of players like Aaron Judge and Gary Sanchez, Santana will have some fresh faces to get used to.

For Minnesota, the opposing pitcher is an interesting one. Girardi could go with the recently acquired Sonny Gray. He was the blockbuster deal this summer, and owns a 2.74 ERA across seven starts since swapping teams. It's 23 year-old Luis Severino that's been the Yankees best pitcher this year however, and his 2.96 ERA along with a 10.8 K/9 could be imposing against Twins hitters. In a one-game scenario, it probably makes sense to have whichever one isn't chosen to start, as an immediate piggy back option.

Offensively, the Yankees have scored more runs than all major league teams not named the Houston Astros. However, the Twins don't find themselves far behind with a 7th best tally of 721 runs. Swatting the fourth most longballs in baseball, the Yankees have benefitted heavily from the big fly. Minnesota should clear the 200 plateau, but they are currently middle of the pack across the sport. New York does tend to strike out at a higher clip than the Twins, and the team .776 OPS is 5th in baseball in comparison to the Twins .770 mark (9th). While the Yankees do lead in virtually every category, the margin is slim, and Molitor's group should be far from out of their element.

There's going to be two separating factors that should be evident in a one game scenario between these two clubs. The Yankees have a much deeper pitching stable, while the Twins have a defensive calling card significantly better than that of their foes. While Santana is capable of drawing the start, Minnesota has little room for error with a bullpen that offers little sure things in a winner take all format. The Twins will need to get up early, and protect their starter in what's generally assumed as a hitter's ballpark. New York can afford to lock down a lead, and even with the struggles of some big names lately, they have hurler after hurler that can jog in from the pen to snag three outs. Miscues will cost the Yankees, and a team with defensive limitations can be exploited by a surging Twins lineup.

Interestingly enough, Minnesota will get a chance to see how things stack up soon before the Wild Card game takes place. With a series in the Bronx on September 18-20, the Twins will step into hostile territory for what amounts to a tune up. A lot in terms of momentum could be up for grabs, and a definitive series win could go a long ways towards a morale boost. Regardless of the venue (and the Twins have played better on the road for most of 2017), these two clubs check in incredibly close to one another. While the Yankees have more firepower over the course of a series scenario, one game leaves all of the theatrics up in the air.

We've now gotten to experience a full season of meaningful baseball, and at least a handful of weeks following a playoff push. If it culminates in a one game playoff with Girardi's 25, the Twins should go in guns blazing. Overmatched in many of the earlier playoff series, the Twins don't find themselves in that scenario this time. Look for Molitor's group to put up a good showing, and the unlikely Twins could be making a push deeper into October.
Posted by tlschwerz at 9:26 AM