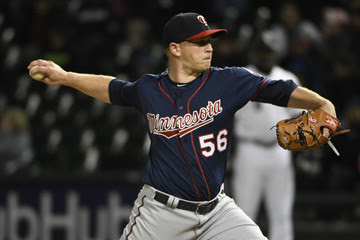 After a drubbing to the New York Yankees in their first matchup since the Wild Card loss last season, the Minnesota Twins had some questions to be answered. Jake Odorizzi struggled, and the bullpen provided little in the form of relief. With position player Ryan LaMarre finishing out the game, Paul Molitor needed some reinforcements, but the question now is; where do they come from?

Leaving spring training, the Twins found themselves needing to juggle a bullpen to include Rule 5 pick Tyler Kinley. He looked promising with velocity out the wazoo, but in what we've seen thus far, little else has come with it. By including Kinley and Gabriel Moya (thanks to a timely Phil Hughes injury) on the 25 man roster, relief staple Tyler Duffey found himself making the trip to upstate New York. Since then, Alan Busenitz has also appeared out of the pen with the big club.

After the 13-run loss, and fourth straight defeat, the Twins optioned Busenitz back to the farm. He'd posted a 6.75 ERA across four innings of work, and while the seven strikeouts are nice, the eight hits are far too many. Moya had been jettisoned previously, as he owned a 10.80 ERA across just 5.0 IP. Giving up three longballs in his brief work thus far, a tweak has to be made as he's now allowed five in just 11.1 IP at the major league level. Kinley is still being held onto after being invested in as a Rule 5 player, but the 24.30 ERA across 3.1 IP simply is unacceptable.

To a certain extent, the problem for Minnesota lies in what moves they've already made. Getting Duffey back to the big league level is a good move. He's posted a 0.00 ERA across 11 IP at Triple-A, and owns a 14/1 K/BB. Behind him though, the options for Molitor and the front office are a lot of the names we've already seen. Busenitz and Moya both look like capable big league relievers to me, but neither has shown they are there right now. John Curtiss could be the next man up from Rochester, but he too would need to get off on the right foot. Outside of those names, there isn't another relief arm on the 40 man roster.

At Triple-A Rochester, Jake Reed (who's currently on the DL),  D.J. Baxendale, and Mason Melotakis are all names of intrigue. Of them, Reed probably has the most upside. None of those three are any sort of a sure thing however, and dipping down a level lower would be asking someone to make a big jump for the Twins. There is the option to ask a starter like Fernando Romero to work out of the pen, but unless he's used semi-regularly, that could be at a detriment to his development.

What this all boils down to is Paul Molitor needing more from the guys currently expected to bolster his pitching staff. Both Odorizzi and Lance Lynn need to be better out of the rotation. When entering from relief, it's been Addison Reed, Ryan Pressly, or bust. Trevor Hildenberger has to return to 2017 form, and Taylor Rogers desperately needs to string together a few strong outings. There isn't a golden ticket waiting to happen, and the cream really needs to rise to the top.

It's absolutely fair to note that the Twins have pitching depth, and it's also fair to suggest that there's a relative quality about it. That being said, the early season returns have been underwhelming, and the group as a whole must do some soul-searching to find out what more each individual can offer.
Posted by tlschwerz at 6:35 AM