Kepler Committing Even if He's Not All In 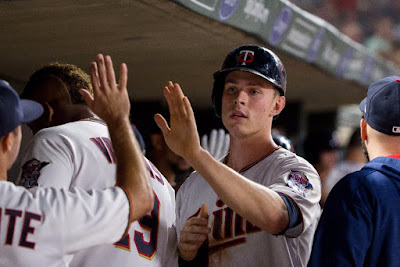 Over the offseason and into spring training, plenty of discussions were had with Max Kepler in regards to his approach. Media covering the Twins probed, and I'd imagine that hitting coach James Rowson continued to challenge the young German. After failing to take a big step forward in 2017, it continues to seem like there's so much more potential left in there. Through the early part of 2018 however, it seems that Kepler has made a few tweaks, and given his comments, they may come as somewhat of a surprise.

When talking with Mike Berardino of the Pioneer Press back in March, Kepler said "I'm not going to be swinging up and doing all that." He not that "it's not about launch angle" for him, and that his goal is to get his "bat head in the zone as early as possible." There's nothing wrong with any of those comments, but in recent years, we've seen the data suggest that the best avenue for success when putting the ball in play is by doing so in the air.

The reality at the big league level, is that ground balls simply don't equate to consistently high-yielding results. Major league players are more than capable of handling routine plays on the ground, and most are just fine turning even the spectacular opportunity into an out. Whether lifting the ball for liners in the gaps, or sending it flying for home runs over the fence, success in the game today comes through the air.

Despite Kepler's comments suggesting he isn't ready to adopt that principle, the results suggest that he may have seen the fruits the process is able to bear. After owning a 12.7 degree launch angle on average in 2017, he's boosted that to a 14.2 degree mark this season. In doing so, he's also seen his fly ball percentage go from 39.5% in 2017, to a whopping 53.6% this season. While getting the ball in the air, he currently has (an unsustainable, but notable anyways) a 20% HR/FB rate in comparison to just an 11.5% mark from a season ago.

Obviously getting the ball in the air also requires you to make strong contact. In that department as well, Kepler has upped the ante. He's generating a career best 42.9% hard hit rate, and pitch recognition seems to be something he's a bit more honed in on as well. With a career 29.5% chase rate, and a 28.5% mark from 2017, he's toting just a 25.6% chase rate thus far in the current campaign.

For a guy like Kepler, being able to generate enough power for extra base hits will be key to taking the next step forward. While he does have plenty of speed at his disposal (he did have 13 triples in 2015 at Double-A), being considered a true threat as a corner outfielder relies upon some thump rearing its head. What's encouraging is that Kepler's frame has always suggested that it will come, and the output has displayed a reality that it may just be a small tweak here or there from sticking for good.

Right now, it's plenty early to be drawing any season-long conclusions, but you absolutely have to be impressed with the results. If Kepler was consulted right now, I'm not sure that he'd agree in his approach being changed at all. It's also not particularly fair to attribute his early success solely to the lift he's applied to the baseball. However, if he's being fair, there's little to detract from the results at this point, and we have a measurable process to point towards.
Posted by tlschwerz at 8:56 AM