Boomstick Became More than a Nickname for Cruz 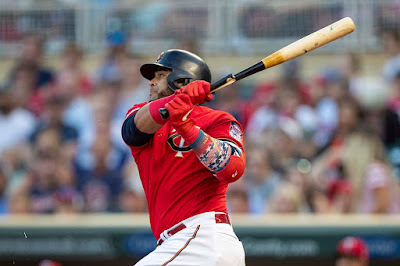 Listen, Nelson Cruz earned the moniker “Boomstick” because he’s become one of the most prolific power hitters in baseball. While most nicknames are rooted in some level of fact, Mr. Boomstick may never have expected the output he’s seeing as a 39-year-old with the Minnesota Twins. The home runs continue to pile up, but he’s pulverizing the leather more than he has ever done before.

Plenty has been made about the baseball in play during the 2019 Major League Baseball season. It’s obvious that changes to the ball itself have been made, and we’re seeing homers at a higher rate than at any point since the PED era. For power hitters like Cruz, an already perfected ability has become that much more lethal. If we’re going to truly understand the difference though, it’s only sensible to dive into the numbers.

37.6%. That’s the career hard hit rate for Nelson Cruz. He didn’t become a full-time big leaguer until 2009 at the age of 28. From that point through the next eight years, he owned a hard-hit rate that fluctuated between 35-38%. As a power hitter who elevated that ball, that output would certainly be capable of sending the ball over the fence. He posted three different 40-homer seasons and compiled a tally of 262. Fighting father time, Cruz had to figure out how to expand upon the ability that had carried him thus far.

2016 was the last time Cruz played more than five games at a position in a season (he’ll play none in the field this year). Solely operating as a designated hitter, perfecting his craft with a wooden stick became the only goal. Maybe not coincidentally, the quality of contact also began to rise. No longer standing in the outfield for nine innings, and able to unleash effort in short bursts, Cruz touched a 40% (40.7%) hard hit rate for the first time in 2017. He then followed that up with a 42.3% hard hit rate. Continuing to elevate the ball with higher exit velocities, the homers kept coming.

For the Twins Cruz has posted a ridiculous 55.3% hard hit rate, a career low 36.6% ground ball rate, and turned in an asinine 34% HR/FB rate. Literally more than one-third of the time Nelson Cruz puts the ball in play, and it doesn’t touch the ground, it leaves the stadium. His hard-hit rate is nearly 5% higher than the next closest batter and he’s pacing baseball in HR/FB ratio. On Statcast’s leaderboards he owns the best Brls/PA% in the sport (13.7 with 2nd at 12.2), and trails only Aaron Judge in average exit velocity (94.5 mph).

Minnesota had an opening in the DH role going into this year, and they turned from an OBP centric lineup to one that could change the game on a single swing. Cruz was an ideal fit, and after turning down a shot with the Tampa Bay Rays, he landed in Minnesota on a 2yr/$26MM pact. That second season is a $12MM team option that the Twins will gladly pick up (and have Cruz on a discount from year one). It’s been one of the most successful free agent acquisitions in organization history, and the next chapters are still yet to be written.

At 36-years-old Nelson Cruz became a full-time designated hitter. At 39-years-old he produced what could be the best OPS of his career, a .662 SLG and what has a shot to be a new high-water mark in homers. Cruz has played in just 90 games for Minnesota (dealing with two stints of wrist issues), but his 33 dingers translate to a 59 per 162 tally. The man got older, got more specialized, and turned into a Rawlings’ greatest nightmare.

Posted by tlschwerz at 1:39 PM