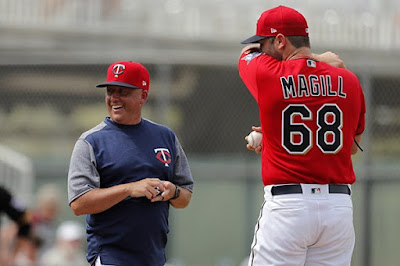 Earlier this offseason the Minnesota Twins started to reconstruct their bullpen. Losing Trevor May was always going to be a big blow, and there hasn’t been much in the form of names yet, but it’s a process the front office has earned trust in.

A pair of big-name free agents with Minnesota ties have already come off the board but deals for either Liam Hendriks or Brad Hand always seemed far-fetched for the Twins. It’s not that they don’t have the money to spend, or need in relief, but nothing about either of those players fits the process of what this organization has done of late. Hendriks got $54 million from the White Sox over three years, while Hand got $10.5 million from the Washington Nationals. The last time Minnesota paid big on a reliever was Addison Reed, and it went up in smoke.

It would be silly to suggest that every reliever be viewed through the same lens as the failed Reed deal, but more realistically there’s the reality of what Minnesota has done with less. Look at some of the names from recent seasons, and the ERA’s posted by players on deals all at $2.75 million or less. It’s not that the Twins purposely set out to be bargain shoppers, but instead identify outliers very well and get the most out of castoffs from elsewhere.

This season Ian Gibault and Brandon Waddell were both claimed off of waivers at the end of October. They each claim a current 40-man spot and feature a slider. It’s a pitch that Wes Johnson and the coaching staff has targeted for some time, and it’s sensible to believe both are currently penciled into the bullpen. Hansel Robles is the lone larger expense thus far, and the former Angels closer was inked to a one-year deal paying him just $2 million. There’s probably at least one more spot open, and you can bet that Minnesota has a type rather than a name in mind.

From my vantage point Trevor Rosenthal looks like the best option remaining, and I loved the fit last year as he returned from injury. He’s going to come with a price tag near the upper levels of single digits however, so that may not be the way they go. There should be a solid grouping of guys like Tyler Clippard and Alex Colome left at the end however, and those pacts should fall within the same range as the Colome deal.

Dating back to 2015 Major League Baseball has shifted a pitching philosophy to a construction of an elite bullpen. How teams get there or create that though, are all made differently. The reality is that often times the mega deals for relievers go up in smoke (hello Wade Davis), and understanding how to best utilize what’s in front of you is the easiest path to success. There’s no denying that a group including Hand or Hendriks has a safer floor on paper, but it all comes down to execution.

On their own the Twins organization has turned Tyler Duffey into one of the best relievers in baseball. Taylor Rogers has looked the part of a lock down piece, and it was his recent seasons in the pen that got Trevor May paid. Edwar Colina could join this group, and Jorge Alcala has already flashed that promise. Sure, Minnesota hasn’t made any big splashes for their bullpen, but it’s probably more about what’s going on behind the scenes and the execution of who the tab, rather than the exciting names, that get the job done.

Posted by tlschwerz at 7:31 AM