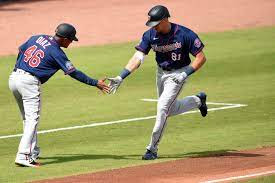 Yesterday the Minnesota Twins had to scratch Alex Kirilloff from the starting lineup when it was discovered he was dealing with wrist discomfort. It sounds as if a looming IL stint is around the corner, and that’s disappointing news for Rocco Baldelli’s hottest hitter. What happens from here could set the tone for the rest of the way.

Miguel Sano has been on the Injured List for Minnesota as he dealt with a leg injury and was working on timing prior to an activation. Kirilloff had been playing first base but could’ve slid back in to left field where Jake Cave has done little more than take up space this season. Now without Kirilloff in the mix, the front office has a decision to make.

The immediate answer would seem to be a veteran placeholder such as Keon Broxton. He looked the part in Spring Training and has had big league success previously. Success is relative however when you’re talking about a guy with a .685 OPS across just north of 1,000 plate appearances. Broxton is a plus defender and does have some pop in his bat, but he’s hardly a sustainable bet to push the bar for a failing Twins team.

Much like Kirilloff before him, if Minnesota wants to respond with the opportunity to make an impact, it’s time for the training wheels to come off top prospect Trevor Larnach. Now 24, the 2018 1st round pick is currently at Triple-A St. Paul. He only has two career games at that level, but the assumption should be that he would’ve spent considerable time there in 2020 had a season take place. The former Oregon State Beaver is a polished hitting prospect with an .850 career OPS in pro ball. He has an advanced approach at the plate and is hardly a strikeout machine despite being a power hitter.

Unlike Kirilloff, Larnach should be ticketed for a corner outfield spot. Whereas Alex is destined to play first base, and do it well, Larnach’s athleticism will keep him in the grass, and he should be able to provide average or better defense out there. Given the shortening length of Rocco Baldelli’s lineup at the big-league level, adding another bat like this that can start in the bottom half would give hope to a club floundering out of the gates.

It’s probably unfair to pin the expectations that were placed on Kirilloff directly to Larnach. That said, they’ve consistently ranked as eerily similar prospects to me, and I’d be far from shocked if the bat didn’t immediately translate for Trevor as well. Keon Broxton is a player in the same vein as Kyle Garlick or Jake Cave. They have utility but asking them to be a regular stretches their overall value. Putting Larnach into a spot where he can contribute at the highest level raises the overall water level, and who knows where things go from there.

He’d need a 40-man roster move, and this is probably sooner than the front office wanted to unleash him, but it’s time for Trevor Larnach to become a Major Leaguer.