Did Nick Gordon Do Enough? 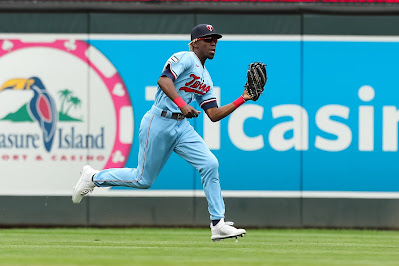 This upcoming season the Minnesota Twins have plenty to decide when it comes to their middle infield. They need a shortstop, and while that could be Jorge Polanco, I’d advise them looking elsewhere. Where, though, does that leave rookie Nick Gordon?

Playing in 73 games and getting exactly 200 plate appearances, Gordon found himself getting a good amount of run for Rocco Baldelli’s squad. There should have been more opportunity had Andrelton Simmons not clogged things for the entirety of the season, but nonetheless Gordon was given a glimpse.

For the past few seasons, I have wondered whether Gordon’s time would come with Minnesota at all. He has a track record of performing well when repeating a level for the second time, and despite missing 2020 with the minor league shutdown, he showed up ready to go in 2021. Miscast as a shortstop, and lacking the power for a second basemen, Gordon needed to reinvent himself. He proved capable of that this season, but where does that leave him going forward?

As a fielder, Gordon saw action at six different positions this past season. The bulk of his playing time came in centerfield (34 G), and his true home of second base was doubled up (17 G). He also made 14 appearances at shortstop, where he’d contest is home, and 12 in the corner outfield with two cameos at third base.

From an all encompassing perspective, it was a jack of all trades, master of none approach. To be fair, that’s ultimately what a utility player is. Gordon adapting to the outfield on the fly should be seen as an incredible boost for the Twins, and something definitely working in his favor. Recording just over 220 innings in centerfield, Gordon posted a -1 DRS there with a -0.8 UZR. It’s too small of a sample size to take much from, but he did also record 1 DRS in 110 innings at second base.

Ultimately, I think that Nick Gordon proved he can be useful anywhere on the diamond. The question still remains if Minnesota should want him in that capacity. On the offensive side of things, the former first round pick slashed .240/.292/.355 for a .647 OPS and a 79 OPS+. Minnesota’s last two utility players posted a 94 OPS+ (Marwin Gonzalez) and a 103 OPS+ (Ehire Adrianza) during the final full year that was 2019. Both were terrible in 2020, but I’d imagine that’s not the bar the Twins are looking to clear.

Gordon’s additional strength is that he can run. The Twins haven’t had much of a stolen base threat outside of Byron Buxton in recent seasons. They definitely have not had a capable pinch runner on their bench. Swiping ten bags and being caught just once, Gordon displayed an ability to generate runs on the basepaths this season. If that’s a skill or advantage Minnesota is looking for, he’s the cheapest option.

I’m not sure if Gordon makes the 26-man to start 2022 or not, but he’s certainly made his case better than it was at any other point coming into his career. There’s not a ton to hope on future development here, but if Minnesota wants to make use of their former first round pick, then it’s seeming like they’ve got a path to get it done.

Posted by tlschwerz at 8:50 AM