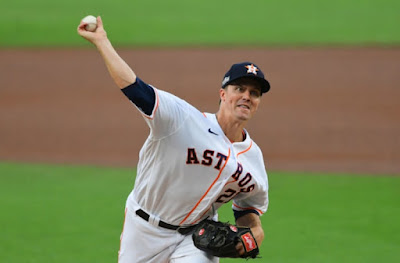 After unloading Jose Berrios at the trade deadline, watching Kenta Maeda go under the knife, and seeing Michael Pineda hit free agency, the Twins starting rotation is bare. Who is the top choice to bolster it?

As of right now you’d have to bank on either Bailey Ober or Joe Ryan being the Opening Day starter in 2022 for Rocco Baldelli. Both showed well in their rookie seasons, but if that’s the top of the rotation, there’s cause for concern in the year ahead. Minnesota failed tremendously on the mound, and depth was exposed quickly as both J.A. Happ and Matt Shoemaker flopped. For the Twins to make a turnaround in the year ahead, the focus must be on a resurgence from the bump.

Similarly to the 2021 season, the hope is that Minnesota will see graduations from the farm. Top arms like Jordan Balazovic, Jhoan Duran, and Matt Canterino all posted mixed results with injuries sprinkled in. Another year back from the cancelled 2020 season, and the hope would be that a clean bill of health is parlayed into peak effectiveness. Before banking on the youth though, the Twins need to give Wes Johnson some workable ammunition for a group that is essentially bare.

The free agent crop this offseason is a who’s who of big names, and while not all may make it to the open market, there should be one or two that fit to Minnesota’s liking. Here’s how I’d categorize the options:

There’s a known commodity and a more unknown question here. Kershaw represents the unknown as he’s dealing with an elbow injury that cost him multiple months this season. He is avoiding surgery for the time being but could be ticketed for a much longer time on the shelf if he goes under the knife. The career-Dodger will be 34 next season but has a ton of miles on his arm. Production has never been the issue and if he can avoid back and elbow concerns for the next year or so, there’s reason to like him on a short term deal.

On the flip side you’ve got a guy in Verlander who will be returning from Tommy John surgery having last pitched in 2020. He’ll be 39 next season and has thrown just six innings since 2019. There’s hardly been a time in which you’ve questioned his ability though, and a clean elbow could have him looking like an appetizing option on a one-year deal. The Astros will likely give him a qualifying offer should that still exist, but Verlander definitely has familiarity with the AL Central.

Having just turned 37, that’s about the only reason to define Scherzer as aging. He’s still every bit the dominant pitcher he has been over the course of his career, and he’s attempting to carry a Dodgers staff through the Postseason. Of the options available, I think he’s probably the most likely to be retained by the current team, and while I wouldn’t expect Los Angeles to give him a long extension, they certainly have the money to persuade him to stay.

With the Astros having rotational issues this Postseason it’s clear they have work to do in that department. I’m not sure they hang onto a guy in Greinke that has hit somewhat of a decline. His 4.16 ERA was the highest mark since 2016 and he’s clearly struggled down the stretch. If another team believes they can work through the current ineffectiveness, this is probably the best bet for a good starter on a one-year deal. He seems like a fit for Minnesota but comes with plenty of uncertainties.

If you want to secure a long-term pact with a rotation anchor this is where you’re turning. Starting with Stroman, you’ve got a guy in the midst of his prime and coming off a very strong season. Not a big strikeout guy, Stroman needs to be backed by a good infield as he’s a ground ball maestro. Someone that appears to be a very good leader and clubhouse presence, this is a personality that could mesh well with the Twins plans for quite some time.

The breakout finally happened for Gausman, and it came in a big way. With the Giants being baseball’s best team, the 30-year-old posted a career best 2.81 ERA. He racks up strikeouts, limits walks, and looks every bit the ace you’d hope for. 2020 is where things seemed to click for the former Orioles pitcher, so you’ll need to make sure there’s a belief in the results going forward, but nothing he’s put up recently is anything an organization would want to avoid.

A positive this winter is that pitching options are plentiful. Those above just barely scratch the surface considering names like Syndergaard, Bundy, and even Pineda are all available. The Twins need to find a path forward, and for a transitional time it might make sense to focus on short term deals. There should be any number of options that are within their wheelhouse, and while the big names are there as always, this might be an opportunity to land the right fit without breaking the bank.

Posted by tlschwerz at 7:49 AM