How Can You be Romantic About Baseball? 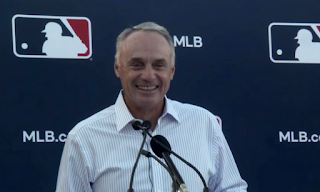 Right now Major League Baseball may be as low as it’s ever been. Back during the 1994 and 1995 strike I was just five years old, way too young to be bothered by what was taking place. At this point in my life, it’s anything but. After Rob Manfred’s address yesterday I could produce nothing more than apathy.

The Minnesota Twins have long been my favorite team. Major League Baseball has been among my most invested interests for the majority of my life. Because of just thirty owners and their puppet, Opening Day is cancelled with no end in sight. As Manfred stepped up to the podium, made that announcement while laughing, and then suggesting it was a both sides issue (hint: it’s not) emptiness set in.

Manfred has done very little to distance himself from the notion that he’s an awful commissioner. Obviously, he’s in a position to represent the interests of the owners, but each opportunity for him to provide a galvanizing rallying cry or momentum, he chomps on his own foot. Manfred comes across like a sleazy businessman with little desire to actually enjoy the sport he oversees. There isn’t a jovial attitude and there’s certainly nothing redeeming about him in connecting with the fans.

For months those connected to the league have attempted spewing a stance that players are needed to move things forward. Despite delays, lack of negotiating, and bad faith bargaining, it’s consistently been a blame game from the league with the only intention being the greatest win. Instead, we the fans, now all lose.

Opening Day is supposed to be a highlight of Spring. We get through the final days of winter with baseball action in Arizona or Florida. It’s the eight month calendar that creates drama on a daily basis through the lens of a wonderful sport. Not only do we not have that calendar to look forward to at this point, but we also have no clue when Rob Manfred and the league will work towards getting things back on track.

I’ll rebound from this; it’s necessary for the union to remain steadfast for change. Baseball will return, maybe in June, or maybe next year, but it will return. I’ll continue to write and enjoy the sport from afar. Right now though, it all feels a bit empty and hollow with one man and one group so carelessly and ruthlessly denying us normalcy on the diamond. Most times it’s hard not to be romantic about baseball, but right now is not most times.

Posted by tlschwerz at 8:42 AM