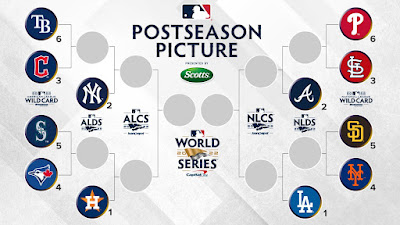 The Minnesota Twins are not going to make the 2022 Major League Baseball postseason, but there's plenty of exciting action on tap for October. With the field set, I figured it's time to put my predictions on paper.

Tampa wins the battle of pitching having been a bit more battle tested in a ridiculously difficult AL East division. I like the Mariners, but think the Blue Jays lineup is too deep. What Jose Berrios looks like in October could be key for Toronto's rotation.

Phillies over Cardinals, Mets over Padres

The Cardinals are winning at the right time, and well, Philadelphia is not. That said, I think the Phillies are a deep enough team to make a run. Seeing Albert Pujols, Yadier Molina, and Adam Wainwright continue the storybook ending would be fun though. For the Mets, in a three game series, it's pretty hard to go against Jacob deGrom and Max Scherzer.

New York's lineup has plenty of questions, but the rotation of Gerrit Cole, Nestor Cortes, and Luis Severino should be the difference in this series. Houston is just too good here, and I don't think the Blue Jays fare as well in a longer series.

Braves over Phillies, Mets over Dodgers

I'd love to take the Phillies here, but Atlanta is rolling right now and is incredibly deep. They may be the best team in the National League. Despite the regular season success for the Dodgers, I'm concerned about their rotation in the postseason. Again, leaning on deGrom and Scherzer.

Houston goes back to the World Series and they do so as the best team in baseball.

Even though the Braves chased down New York in the standings, give me the Mets getting the last laugh.

Houston wins yet another World Series, with no scandal attached.