Byron Buxton, And The Trip To The Show 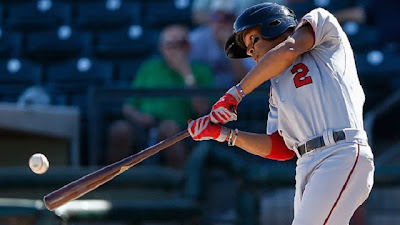 Byron Buxton is not only the Minnesota Twins most exciting and number one prospect, but also is regarded as the best prospect in all of baseball. Having been drafted out of high school with the second overall pick in the 2012 draft, he's no knocking on the door of the major leagues. Before he gets the call though, what do the Twins want him to do to earn it?

After missing what amounted to the majority of the 2014 season due to a multitude of different injuries, Buxton entered spring training with no chance of making the big league club. Expecting some rust from the get go, the Twins sent Buxton to Double-A Chattanooga. In his first few games, Buxton showed definite signs of that rust, and his average rested right around the Mendoza Line. Now with a stellar few weeks under his belt, he's batting .274/.340/.505. Having blasted three home runs, driven in 15 runs, stolen seven bases, and ran out five triples, Buxton is showing off his offensive prowess. There's no doubt he could immediately be a Gold Glove caliber centerfielder, but the Twins want the complete package. Putting together a good couple of weeks is a good start, but there's no doubt Minnesota wants a little more.

While healthy, the Twins organization has been aggressive with their promotion of Buxton. He played just 68 games at Cedar Rapids before being promoted to Fort Myers in the 2013 season. Then in 2014, injuries slowed him out of the gate, but it took only 30 games before Minnesota moved their stud prospect to Double-A New Britain. Having been injured in his very first game, it's hard to project how 2014 could have ended, but there's no doubt he would have been pushing for his next challenge. Stringing together some strong performances in Chattanooga will have Buxton looking to move again, but the question will be where.

Looking at similarly aggressively accelerated prospects, Mike Trout and Kris Bryant, the Angels and Cubs saw plenty in their young stars. Trout played at Cedar Rapids just two years before Buxton and batted .362/.454/.526 (compared to Buxton's .341/.431/.559). It took just 91 games at Double-A (while hitting .326/.414/.544) before the Angels moved Trout to Triple-A Salt Lake. Trout batted over .400 for 20 games, and it was apparent his time in the minors was done.

Although more comparable to trout from a pure hitting perspective, Buxton can also be tied to the promotion of the Cubs Bryant. Promoted just a matter of weeks ago, Bryant dominated the minor leagues. Hitting .336/.390/.688 across three different levels in his first professional season, as well as .325/.438/.661 in Double and Triple-A in 2014, the Cubs knew what they had. It took 77 Triple-A games before the Cubs gave their third basemen of the future the call.

So looking at Buxton, what does it all mean? There's probably little reason to expect the power numbers to be the same as the two compared prospects. Both Bryant and Trout are much more consistent home run hitters, that said, expecting Buxton to contribute 15-20 at the next level is more than fair. The pop in his bat has shown just fine, the defense is there, and so is the speed. Right now, the biggest thing Buxton needs on his side is time.

After what was a wasted 2014 season, Minnesota wants to make sure Buxton is comfortable. He's played just 24 games in Chattanooga, and roughly half have been good ones at the plate. Unlike Trout and Bryant, there may not be reason that Buxton needs Triple-A exposure. No matter how the Twins decide to promote him however, the timeline is running short on his minors stay. With the recent tear, and the club winning at the top level, Buxton probably has less than 70 games left down on the farm. I'll leave it to the Twins to split that up how they choose.

Initially I thought we'd see Buxton sometime in late August at the earliest. If he can continue to trend upwards and stay healthy, there's no reason to believe he wouldn't be the best addition to the Twins in July. Right now he's not ready, and it isn't about the Twins slow-moving him or avoiding arbitration. His readiness can continue to change drastically though as long as things continue to progress positively. No matter what, Byron Buxton is going to be here sooner rather than later, and we are all in for some excitement.
Posted by tlschwerz at 8:02 AM