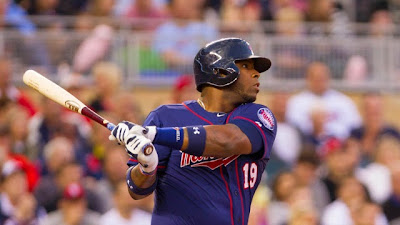 Over the weekend, the Minnesota Twins took yet another series, this time knocking off the Tampa Bay Rays. In beating the AL East in their first opportunity on the season, the Twins start off on the right foot against a typically tough division. After dropping the finale however, the Twins made somewhat of a curious decision in sending Kennys Vargas back to Triple-A. As the season pushes forward, expecting the organization to continue to make big moves from within should come as no shock.

Looking first at Vargas, categorizing this move would be easiest to do so in saying it was an odd move, and maybe even a step backwards. Vargas was named the team's designated hitter from the get go, and despite making the jump from Double-A a season ago, was expected to run with it. He got off to an incredibly slow start batting just .172/.232/.234 in April. Spared a demotion through the first month, even with Josmil Pinto (another DH candidate) tearing up Triple-A, the move came at a weird time.

In 11 games in the month of May, Vargas has hit .375/.405/.575 with two home runs and six RBI. While he still has chased too many pitches (nine strikeouts with just two walks), the production was in a good place. With Minnesota heading to Pittsburgh for two National League games (without the much-needed DH), Vargas would have a tough time getting in the lineup. If the Twins were operating under the belief that Vargas will be back immediately following the two-game stint against the Pirates, I could get behind the move. It doesn't appear to be that way however, and a bench with players such as Chris Herrmann, Doug Bernier, and Eduardo Nunez leaves Minnesota with some ugly pinch hitting options. Vargas noted he needs to work on better at bats down on the farm, and while that may be true, it held more weight at the end of April.

Sticking with the big league club, there's no doubt a handful of moves that will become in focus within the next couple of weeks. Maybe most notably, Oswaldo Arcia is going to eventually be ready to resume his role in left field for the Twins. Despite the ugly defense, there's no reason to give up on a commitment to what could still be a promising young power hitter. Eddie Rosario has shown glimpses of excitement, but with the expectation he would be overmatched from the get go, his last five games (.143/.200/.214 9 K 1 BB) haven't done much to buck that notion. Rosario would benefit from more seasoning down in Triple-A and likely would be the corresponding move when Arcia is ready to return.

In 2015, the Twins have gotten much stronger pitching performances than in previous seasons. However, the bullpen has been somewhat touch and go in the early going. Most notably, Brian Duensing (the pitcher the Twins took to arbitration and paid $2.7 million) owns a 10.57 ERA through 7.2 IP and has struggled to show any signs of hope. Opposing hitters are batting .429 off of him and his 2.74 WHIP is hideous. In seeing Ryan Pressly receive the call from Triple-A and immediately become one of the Twins best relievers, there's no doubt there are better options down on the farm. It's probably time for the Twins to cut ties with Duensing and give the spot to someone like A.J. Achter, Logan Darnell, or even Caleb Thielbar.

Moving down the rungs of the organization, the next most obvious stop becomes Double-A Chattanooga. While not yet ready to make the jump to the big leagues, Jose Berrios is kicking down the door to Rochester. Through his first seven starts, he owns a 2.60 ERA, 10.6 K/9 ratio, and is walking batters at just a 3.0 BB/9 clip. Having pitched in one game at the Triple-A level to end his 2014, Berrios should surface at the next level sooner rather than later. If he can continue to pitch more than throw, and refine that at Triple-A, there's little reason to believe he couldn't be an option for the Twins at some point in 2015.

On the offensive side of Double-A, the talk is all about both Byron Buxton and Miguel Sano. All things considered, neither of them are ready, and talk otherwise would seem shortsighted. Buxton went on a 16 game hot streak from April 25 through May 11 in which he hit .338/.395/.662 with five triples, three home runs, and 20 RBI. Since however, he's stuck in a seven game cold streak batting just .133/.161/.233 with just two extra base hits. Neither are indicative of the greater whole, but serve as a reminder that baseball's top prospect missed virtually a whole season, and needs to get back in a groove. If he can even out the performances, there's no doubt he could be with the Twins in August. Not being on the 40 man roster, his promotion would seemingly be to either compete now, or not until 2016.

Looking at Sano, the Twins power hitting third base prospect also has gotten off to a slow start. Despite batting just .228 on the season, Sano has enjoyed May hitting .300/.384/.583 with four home runs and 11 RBI. Again like Buxton, missing the 2014 season is going to have Sano knocking off some rust. Unlike Buxton, he is on the 40 man roster and could be considered for a September cup of coffee. With the Twins in a good place however, Sano has the opportunity to leap from Double-A to the big leagues around July if he can continue to trend in the right direction.

As the Twins look to close the chapter on the past four years of ugly baseball, it will be how they manage the talent from within that gets them there. I find it hard to agree with the demotion of Kennys Vargas, but with plenty of other roster moves looming, this club will push it's own ceiling from within. Although the past four years haven't been fun, the reward appears to be some exciting baseball in 2015.
Posted by tlschwerz at 7:20 AM