Did The Twins Create Another Debacle? 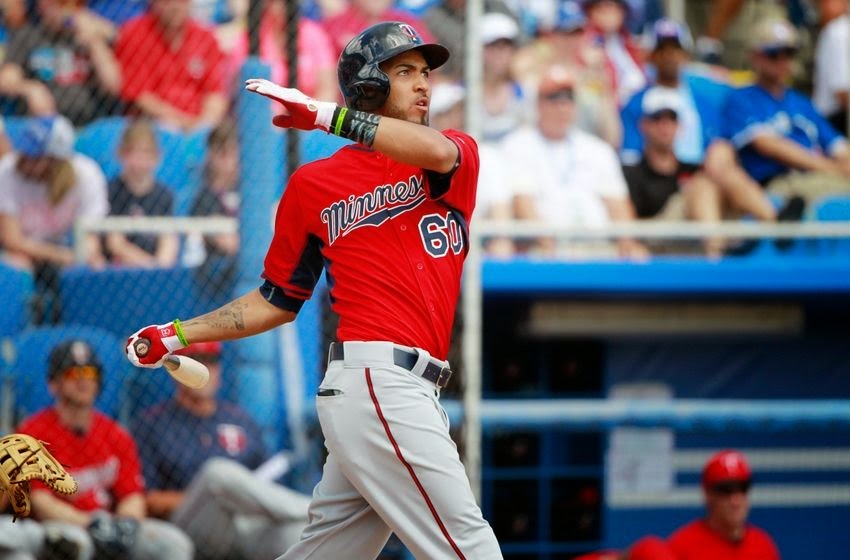 Yesterday the Minnesota Twins found themselves in need of another body as they were set to put Oswaldo Arcia on the disabled list. While Arcia sounds hopeful that he will just miss two weeks, the Twins needed a replacement for the immediate future. Despite Arcia being an outfielder, Paul Molitor noted that the Twins considered names such as Aaron Hicks, Eddie Rosario, and Josmil Pinto. When the dust settled, it was Rosario called up to make his big league debut. Now we have to ask, are the Twins in a spot to do more harm than good?

Positionally, Arcia is a corner outfielder. He plays left field for the Twins, and occasionally is forced to deal with the overhang and difficult wall in right field. While Hicks is a centerfielder by trade, it's pretty obvious that Byron Buxton will force whomever to his corners at some point. Rosario has played all over the outfield, but typically calls left his home. Looking at that information, it would appear that Rosario is in fact the only one not making a change in positioning. In bringing Rosario up though, the Twins have a few questions to answer.

Playing at Triple-A for the first time in his career, Rosario has just 23 games under his belt above the Double-A level. The 23 year or has never been an uber-prospect, but did find himself ranked 60th by Baseball Prospectus on the 2014 prospect rankings. After a 50-game drug-related suspension last year, Rosario has worked to get his career back on track. That work however is what leads us to the biggest question marks in regards to the Twins latest roster decision.

Returning from his suspension in 2014, Rosario went on to hit just .243/.286/.387. As a career .291/.340/.480 hitter across six professional seasons, those numbers are down significantly. Adding in the fact that 2015 has seen him hit just .242/.280/.379, there has to be some reason for concern. Cold Omaha's Brandon Warne went as far as noting that those outside the organization fear Rosario's current approach won't handle big league pitching, and it's apparent he's scuffling at Triple-A.

So if Rosario with Rosario being called up, it has to mean that Hicks is in a similar boat correct? Well, Hicks has actually performed extremely well for Triple-A Rochester this season. He's currently slashing .289/.375/.494 and has hit well since his demotion in 2014. His defense would immediately slot in as the best of the Twins outfield options, and he has plus speed as well. Despite being a centerfielder, either Jordan Schafer or Shane Robinson could slide over to left field to fill Arcia's shoes.

With that much going for Hicks, what's the thinking here? At this point, I have to think the Twins see Arcia's injury as a very temporary issue. While that is somewhat of a gamble, it looks to be the operating thought process. If Minnesota does in fact believe that Arcia will just miss two weeks, that gives them time to see Rosario at the big league level and send him back down.

There's no doubt that Hicks has struggled at the major league level, and despite the indicators suggesting he should be a different player this time around, I doubt the Twins want to call him up without the intention of him staying for good. The troubling part in this equation is that while Rosario may get a fun two week audition in, what could it potentially do to him as a player?

As it stands, there's very few indicators suggesting that Rosario can handle the big leagues. Sure, he was good this past fall in the Arizona Fall League, but he's struggled at both Double and Triple-A since returning from suspension. He's not an on base guy, and his defense projects somewhere around Schafer's (so mediocre at best). If Rosario comes up for a two week stint, and the Twins plan on playing him (as they should if he's here), being overmatched could be a significant detriment to his confidence going forward.

It would appear he has plenty to work on down on the farm, and throwing him against even worse odds isn't going to do any wonders for his development. I'm not ready to suggest that the Twins have given up on Hicks, I would hope they haven't made that mistake. I'm also not so certain that even this small sampling of what could be an exciting player is the right move.

It's been apparent over the past few years that while slow playing certain levels, an immediate jump hurt Twins prospects to a certain extent (ask Hicks or the now struggling Kennys Vargas). Bringing Rosario up for a two week period to see what you have before he's ready could end up doing more damage than good. He's yet to enter the lineup, but that should change soon, and let's hope things don't go downhill.
Posted by tlschwerz at 10:15 AM