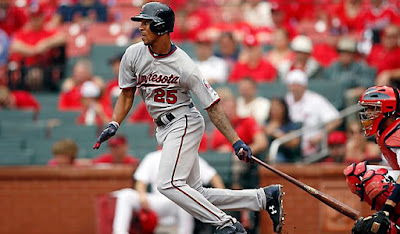 While the offseason has been somewhat slow for the Minnesota Twins, they made one big splash in signing Korean slugger Byung Ho Park. Although Park is not a prospect joining the fold on a big league deal, he'll be one of many Twins rookies in 2016. With one of the best farm systems in all of baseball, it's the home grown prospects in the Minnesota organization that also provide plenty of excitement.

As much as the Twins should be looking to address their deficiencies on the big league roster from outside of the organization, they could potentially have numerous answers from within. Despite graduating a couple of key prospects a season ago, Minnesota still boasts some impressive youth. Without further ado, let's get into it. Your Off The Baggy, Top 15 Twins Prospects:

1. Byron Buxton CF Buxton just barely makes the cut, and it literally is by the slimmest of margins. He didn't accumulate the 45 days of service time due to injury, and he ended up with 129 at-bats a season ago (two shy of surpassing the required 130). He'll enter the upcoming season with a legitimate claim to AL Rookie of the Year honors, and he'll have a decent amount to prove. Buxton stumbled out of the gate for the Twins a season ago, but his .301/.383/.489 minor league slash line is going to show up. Expect him to break out in a big way this season.

2. Jose Berrios SP Behind Buxton, there is no Twins prospect with more excitement tied to them. After an impressive 2014 season that saw the Puerto Rican rise three levels in the Twins system, he followed it up by being even better last year. Berrios owned a 2.85 ERA in 12 Triple-A starts, and compiled a 9.9 K/9 mark at the highest minor league level. He's taken plenty of criticism about his stature and sustainability while dispelling all of it along the way. Berrios has impact starter written all over him, and this should be the year it appears in Twins Territory.

3. Tyler Jay SP 2016 will mark Jay's first full year working as a starting pitcher. Drafted as a reliever in the first round out of Illinois a season ago, Jay was going to be pushed in his professional debut. Placed at High-A Fort Myers, Jay struggled before settling in to end the year. His strikeout stuff played well, and his biggest detriment was an inflated BABIP by batters facing him. It will be interesting to see how Jay transitions to the rotation, but as a fallback option he's a legitimate lock-down reliever. As the 6th overall pick in the 2015 draft, a reliever wouldn't be ideal, but I think Jay has the chops to stick as a starter, and be a very solid one.

4. Nick Gordon SS At points during the 2015 season, it appeared the Twins had no answer in sight at shortstop. That changed with the emergence of Eduardo Escobar. It is shortstop-of-the-future in Gordon though who may have impressed the most. After a slow start to the year, Gordon turned in a .308/.349/.430 slash line from July 1 through the end of the season. He has doubles power, and his instincts at short are beyond great. I'd expected him to succeed in a similar fashion in the year ahead. A jump to High-A Fort Myers will test him, but the 20 year-old has all the makings of a very special player going forward.

5. Max Kepler OF If Nick Gordon had the most impressive 2015 season among infield prospects, it was Kepler claiming that award for outfielders. After laying waste to Double-A Chattanooga, Kepler was given a September cup of coffee with the Twins. His .322/.416/.531 Double-A slash line was exceptional, and he's already pushing for big league playing time. There's a very outside chance he breaks camp with the Twins, but regardless, he should see plenty of action for the Twins in the year ahead.

6. Stephen Gonsalves SP It was Berrios who dominated the upper levels of the Twins system in 2015, but it was Gonsalves who was making a mockery of Single-A talent. At Cedar Rapids, his ERA was a sparkling 1.15. It rose to 2.95 at High-A Fort Myers in 15 starts, but still was more than impressive. Gonsalves ended up with an 8.8 K/9 rate a season ago. Unfortunately, it dipped to 6.2 per nine at Fort Myers, but it's fair to chalk it up to his first experience at that level. He's going to start at Fort Myers in 2016, with a chance to make his Double-A debut at some point. Just 21, Gonsalves is trending in the right direction.

7. Jorge Polanco 2B Polanco takes a bit of a drop in the rankings this year, but it's less about his performance than it is of those around him. Polanco essentially replicated his 2014 that landed him in the big leagues for a brief five game stint. He slashed .288/.339/.386 between Double and Triple-A in 2015. As of right now, Polanco's bat is more than ready for the next level, but it's his glove that leaves plenty to be desired. He made 20 errors in 83 Double-A games at shortstop, then followed that up with another eight in just 19 at the Triple-A level. Polanco is a second basemen through and through, but the Twins don't have a need there. I still am of the belief that Polanco's greatest asset to Minnesota is as a trade chip.

8. Taylor Rogers SP Including Rogers within the top 10 is a great development for the Twins. Not only is he another strong pitching prospect, but he's the second lefty of the group. Rogers was the anchor of the Triple-A Rochester rotation in 2015, and for good reason. Across 27 starts, how owned a 3.98 ERA while limiting walks to just 2.3 per nine. Although Rogers isn't a strikeout guy (just 7.0 K/9 for his career), he flashed well in the Arizona Fall League (2.88 ERA 7.6 K/9). I think he's probably more of a reliever at the next level, but that's far from a bad thing for a team needing bullpen help.

9. Nick Burdi RP Although Burdi's 2015 saw a demotion for the fireballing prospect, it's hard to look at it with too much disdain. He struggled with walks early at Double-A Chattanooga, and then eventually was able to figure things out. On the season, he posted an 11.7 K/9 and his flawless Arizona Fall League performance (8.0 IP 0.00 ERA 1.1 BB/9 12.4 K/9) leaves plenty to build off of heading into the spring. He should be given a look by the Twins over the summer, and he has the stuff to be a key cog in the late innings of an important game.

10. Kohl Stewart SP For the second straight year, the Twins 2013 first round pick took a step backwards. Once again dealing with injuries for a portion of the season, Stewart saw his strikeout rates take another dip. After dropping to 6.4 K/9 in 2014 (from 10.8 in his debut season), Stewart fanned batters at just a 4.9 K/9 clip at High-A Fort Myers. He kept his walks in check issuing just 3.1 per nine, and in turn experienced just a slight rise in his ERA (3.20). Stewart was once projected as a top-of-the-rotation starter but that luster has since worn off. The year ahead may be the most important of Stewart's career, and righting the ship could go a long ways for his future prospects.

11. Adam Brett Walker OF Arguably one of the hardest prospects in the Twins system to project future success for is Walker. For the second season in a row, he was a home run hitting machine, this time around with 31. The flip side to that is he struck out a ridiculous 195 times at Double-A. Walker's strikeout rates aren't good, and the competition is only going to get better as he moves up the ladder. If Walker can somehow figure out how to harness that power while still having some discipline in regards to the strike zone, he could transform himself into an impact player at the next level. Right now, he's a power hitter that's a long ways off from being a reliable contributor.

12. Alex Meyer RP Entering 2015, there was plenty of reason to argue Meyer had a legitimate claim to a rotation spot. After following up a 4.4 BB/9 rate in 2014, Meyer declined to 4.7 in 2015. His strikeouts were still there (9.8 K/9 in 2015), but his ERA ballooned to 4.79 at Triple-A Rochester despite making just eight starts. Minnesota probably hasn't completely moved on from Meyer as a starter, but he has the makings of a very solid reliever. If he can show a better hold on his command early in 2016, expecting him to be one of the twins best relievers is not out of the question.

13. J.T. Chargois RP Healthy again after missing multiple seasons, Chargois pitched in the Twins organization for the first time since 2012. Splitting time between Fort Myers and Chattanooga, Chargois made easy work of both levels. He owned a 9.9 K/9 rate on the season and compiled a 2.62 ERA. Although he doesn't throw quite as hard as Burdi, he's plenty capable of blowing the ball by hitters. Very close to major league ready, Chargois is another name that should be an internal options for a needy big league bullpen.

14. Lewis Thorpe SP Thorpe did not pitch in 2015 after undergoing Tommy John surgery. The 20 year-old Australian reached Cedar Rapids at the age of 18 before going under the knife a season ago. He's going to be eased back in, but pitching in Iowa at some point during the 2016 season should be the expectation. His 2.96 career ERA combined with an 11.2 K/9 career number suggests he still should remain a very exciting prospect.

15. Jake Reed RP In a system seemingly filled with pitching prospects, it's Reed who rounds out the Burdi/Chargois group. All three profile as impact bullpen arms, and Reed fits a similar mold to the aforementioned two. His strikeout rates are lower over his career (8.5 K/9), but he's also walked just 2.5 per nine in his two minor league seasons. Reed struggled and was demoted from Double-A Chattanooga in 2015, but it's not indicative of what is to come. His Arizona Fall League performance was dominant (10.2 IP 1.60 ERA 8.4 K/9) and he has a chance to get to the big leagues this summer.

Minnesota has a good grouping of both hitters and pitchers among their top prospects. With a major league roster looking for talent to push the overall ceiling, the graduation of internal prospects should help to accomplish just that. The Twins continue to have one of the deepest farm systems as 2016 begins, and it should benefit them in the seasons ahead. should benefit them in the seasons ahead.
Posted by tlschwerz at 8:59 AM