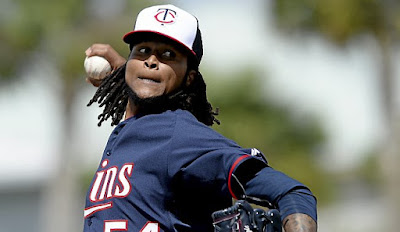 More often than any other area needing to be addressed by the Twins, it's starting pitching I have seen noted by national types. While Minnesota no doubt had a catching issue, and the bullpen remains largely unchanged from the ineffectiveness it showed a year ago, the belief is that the Twins need an ace. There's truth in the though, Minnesota is no doubt void of a frontline starter, but they probably don't need one either.

This offseason, a lot has been made about how the Twins will round out their starting rotation. I've talked about it plenty here at Off The Baggy, and it would appear the Twins rotation is all but set. A Santana, Hughes, Gibson, Duffey, Milone starting five doesn't have a headliner, but it also lacks glaring weaknesses as well. Looking around the AL Central, that actually may play to the benefit of the home nine.

Not long ago, I took my annual look into what the AL Central will look like when the dust settles come September. While the Twins are likely headed for a minor step back, the argument could easily be made that they are the most likely squad to have the highest potential to swing within the division. If everything breaks right, the Twins could find themselves hanging a pennant, and conversely, could end up at the bottom significantly out of it if only a few key things go wrong.

As things stand currently, the Twins look like a middle of the road AL Central team. Most realistically finishing third in the division, it's an interesting concept when comparing that to starting pitching. Of the AL Central opponents, there's only two starting rotations that would seem far and away better than Molitor's group.

First, it's easy to call the Indians rotation the cream of the crop in the Central. While I'm nowhere near as high on them as many are, the talent is more than evident. Corey Kluber remains an ace, and even in a down year a season ago, he was lights out far more often than not. Carlos Carrasco remains a very strong second option, and has plenty of ace ability on his own. Eventually, the Indians are still hoping that Danny Salazar can click, and should he, the division would be worse off for it. Regardless whether it's Zach McAllister, Trevor Bauer, or TJ House Rounding out the final spots, Cleveland has strong pieces one through five.

Then there's the Chicago White Sox, who are actually trending towards overtaking the Indians rotation in my opinion. Chris Sale is one of baseball's five or six best pitchers. Jose Quintana would be an ace for many other teams, and Carlos Rodon flashed plenty of excitement during his debut season. Robin Ventura's final two starters leave something to be desired, but there's little doubt the top three can go out and get you a win on any given day.

When taking a look at the Royals rotation, it's more than clean to see why the Twins are in a better place. Now without Johnny Cueto, who actually was a negative outside of the playoffs, Kansas City looks putrid as a whole. Headlined by Yordano Ventura, who should rebound in the year ahead, a number two starter is either Edinson Volquez or Ian Kennedy. Recently signed for $70 million over the next five years, Kennedy is a far cry from the Cy Young competitor he was back in 2011.

Likely worse than the likes of unsigned free agent Yovani Gallardo, and maybe more closely compared to former Twin Mike Pelfrey, Kennedy in the top three is quite the gamble. With the Royals rounding out the group relying upon the aging Chris Young and the likes of Jason Vargas or some other warm body, there's little reason to question why their bullpen has to be so good.

For the Tigers, it's more patchwork than anything. Of course Jordan Zimmerman provides a very nice piece, but he hides what's a bigger issue. Justin Verlander hasn't been good for quite some time, and Anibal Sanchez hasn't been healthy for even longer. Relying on youth for the back end will be an interesting strategy as well. Detroit hasn't had an in house piece work for a while, and although their exciting youngsters aren't home grown, development will be worth watching.

At the end of the day, if pitching is the most important aspect when it comes to winning, the Twins are in what can be considered far from a bad place. The Opening Day rotation won't bring fireworks, but having Jose Berrios waiting in the wings with some depth options at the top of the organization, Minnesota can feel comfortable going forward. For all the games Minnesota pitching may not win them, there should be plenty more often than not that the day's hurler gives the lineup a chance.
Posted by tlschwerz at 7:41 AM