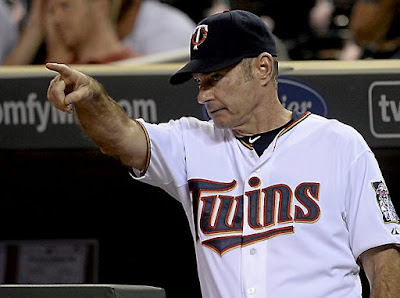 We are quickly coming to a close on the month of January, and that can only mean one thing, pitchers and catchers begin to report to spring training soon. For the Twins many of those players will funnel down to Fort Myers following the conclusion of Twins Fest. With a handful of exciting non-roster invitees this season, Minnesota should have plenty of competition for the active roster. The question is, who makes it come Opening Day?

We've taken a look at the lay of the land in the AL Central, and the Twins look poised to be right in the thick of things. How far they fluctuate up or down should have plenty to do with what contributions they get from new faces, and which cornerstones continue to produce. Much of the active roster appears to be a forgone conclusion, but there's a few cracks for players to force their way in.

Here's how I expect the Twins to kick things off April 4th at Camden Yards:

Santana and Hughes could no doubt flip-flop for the Opening Day starter role. Santana finished the year off on a hot streak, while Hughes is looking for a return to 2015 form in the year ahead. Regardless of who starts game one, the combination of those two will be looked upon to shoulder the load of holding down Minnesota's rotation.

More than any other starter in 2016, I expect Kyle Gibson to take another big step forwards and expand upon what was a nice season a year ago. Tyler Duffey has shown he has the stuff to belong in the big leagues, and his sophomore season will be about continuing to make hitters miss despite a new level of familiarity.

Rounding out the group is the lone lefty of the bunch, Tommy Milone. More than capable as a back-end starter, Milone as a 5th highlights the Twins rotational depth (something we haven't seen in recent years). Both Duffey and Milone will be pushed for continued success by the likes of capable arms on the farm such as Jose Berrios.

Starting Lineup (9)
The infield remains unchanged from how it finished a season ago. Suzuki will rotate catching duties with John Ryan Murphy, but should get the first crack. Mauer remains at first while Brian Dozier looks to put together a complete season of All Star caliber play. With Trevor Plouffe remaining with the club, his bat and glove keep him at the hot corner.

Patience paid off sticking with the lottery ticket acquired in exchange for Francisco Liriano. Eduardo Escobar was one of the best shortstops in the big leagues after settling in down the stretch, and while regression is probably due, he's more than a capable starter. Newly acquired slugger Byung Ho Park gets DH duties, and then we get to the outfield.

Sano in left is going to be interesting considering the ground to cover. Oswaldo Arcia and Josh Willingham have both been a warm body in the role previously, and there's some reason to believe the Sano experiment could work. He should be aided by the speed of both Buxton and Rosario to his left out in the grass.

A four man bench is filled out by two players the Twins are likely going to be forced to bring north (for better or worse). Santana actually projects well as a super utility type that could play both the infield and outfield, even if it's at a less than ideal clip. He should spell players around the diamond, and if he can hit, could find himself in the lineup 2-3 times a week. Arcia, like Santana, is also out of options, and the Twins are best served to give him every chance to succeed. Whether getting starts in the corner outfield, or as a bench bat, it's 2016 or bust for the Venezuelan slugger.

Avoiding arbitration, the Twins agreed to a new one-year deal with Derek Jeter's former replacement, Nunez. He'll spell players on the left side of the infield, and we should also avoid seeing him in the outfield this season (thankfully). Monitor's bench candidates will be filled out by backup, and hopeful eventual starter, John Ryan Murphy. Looking to replace Suzuki in the near future, the Twins could flip flop the vet an Murphy relatively early on.

Bullpen (7)
Despite having relief questions, there aren't any at the back-end of the Twins pen. Glen Perkins is looking to stay healthy for a full year, but he's coming off a third straight All Star trip. When he's healthy, he's among the best in the game. Bridging to him will be the likes of the Twins two other sure things in the pen, Kevin Jepsen and Trevor May.

From there, things get more interesting. After avoiding arbitration with Casey Fien, Minnesota will reward the reliever for a strong finish to the 2015 season. He remains the only sure thing of this final group. Brought in on a minor league deal, Fernando Abad appears to have the inside track as the token lefty in relief. That leaves two spots, and one almost certainly to be claimed by the massive contract of Ricky Nolasco. Minnesota needs Nolasco to perform for anyone else to have interest in him, and doing so could prove value to the Twins as well.

That leaves one opening, and it may come as somewhat of a surprise. While Michael Tonkin could claim the spot, I'm giving it to former top pitching prospect Alex Meyer. In relief to end the year, Meyer pitched extremely well and was deserving of a September call up. An immensely higher ceiling than other options, Meyer could go one to be one of the Twins best in relief. He's going to need to earn it in the spring, but I'd have a hard time betting against him.

Just Missed
It would be fun to consider Jorge Polanco and Jose Berrios as just missed type players, but I think we'd be fooling ourselves. Whether Berrios deserves an Opening Day inclusion or not (he does), his exclusion isn't performance related whatsoever. For Polanco, missing 25 man shot comes down to being a man without a role. His bat is ready, but he can't field and he's stuck behind Dozier at this point.

For the guys that may have had a shot, there's just a little knock on each of them. Kepler gets to feel the roster crunch, and will likely have to wait for Minnesota to sour on either Santana or Arcia first. He shouldn't be a 4th, and will likely get regular outfield starts when called upon. Kenny's Vargas finds himself in an opposite scenario, controlling his own destiny. Likely destined for a bench bat role, he absolutely has to hit. Not doing so last year hurt his chances, and he'll have to make noise with his bat to get back up.

The trio of pitchers left off is a group of familiar names. Ryan Pressly has been very effective when healthy, but he's coming off an injury that saw him spend nearly all of the season on the DL. With a couple of other options, the Twins can afford to take it easy with him. For Tonkin, the decision to leave him off is a difficult one. He's out of options, and that very well could get him the job. He was sent up and down far too often last year, and it will depend on whether the Twins decide to stick with him for a fair amount of time or not. J.R. Graham rounds out the group after being a Rule 5 guy a season ago. he worked well when hidden, but was exposed far too often and could benefit from some more time on the farm.

As the Twins get set to embark on Fort Myers, there's really not a whole lot of unsettled business. While guys at the top may feel comfortable, it's in relief that there seems to be the most contention to make waves. Who does so will be worth monitoring, and as always, there's that spring training surprise.
Posted by tlschwerz at 11:22 AM