From Korea With Success: Thames Paves For Park 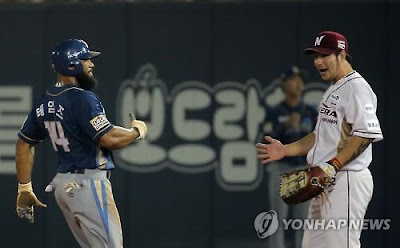 The Minnesota Twins inked ByungHo Park to a 4 year, $12 million deal prior to the 2016 Major League Baseball season. Park's first year stateside didn't go well, and I believe a lot can be attributed to a nagging wrist injury. In 2017 however, fellow KBO slugger Eric Thames is taking the league by storm, and it's fair to wonder what the difference is.

Thames came up with the Toronto Blue Jays, making his debut in 2011 at the age of 24. He was a 7th round pick out of Pepperdine, and his first two big league seasons (he also spent time with the Mariners) equated to just a .727 OPS and 21 total homers. After struggling to grab hold in the big leagues, Thames took his talents overseas.

While both Eric Thames and ByungHo Park were gargantuan power hitters in the KBO, it was Thames who was showing a bit more underlying sustainability. The Californian was more locked in at the plate, and it was his discipline that helped to foster his power.

Fast forward to 2017, and Thames is continuing that same narrative at the big league level.

When Thames debuted, he was more of a free swinger with a powerful hack. He owned a 175/38 K/BB ratio across his first 181 MLB games. In 2017 however, the Brewers slugger has struck out just 18 times while drawing 13 walks. On top of that, Thames owns just an 8.8% swinging strike rate, and he's chased pitches out of the zone just 20.6% of the time. His contact rates are on par with his career numbers (77.4% in 2017, 75.6% career), but he's simply going after more quality pitches.

Across the 10 homers Thames has to his credit thus far, we see that he's victimized all pitches in all zones. He has hit fastballs, changeups, curveballs, and sliders over the fence. He's also taken pitches inside, outside, and down out of the yard. Somewhat surprisingly, the one type of pitch he's yet to homer on is the ball up in the zone. Waiting out his pitch however, has put Thames in the driver's seat when it comes to dictating an at bat. 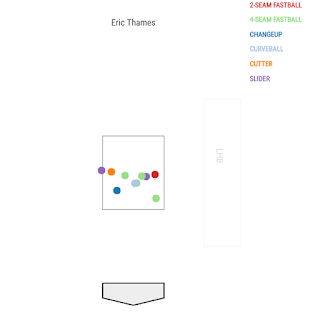 With no data to speak of in 2017, Park's numbers come from his debut season. It was apparent that he struggled with velocity, and reading breaking pitches seemed to be a challenge at times as well. I'd wager that a good deal of the problem was his wrist injury, but he displayed a much lesser ability to wait pitchers out than the aforementioned Thames. Although the 26.7% chase rate isn't terrible, Park had a poor 15% swinging strike rate.

Right now, the Twins slugger is on the shelf, but his 2017 production is reliant upon two key abilities. One, he absolutely needs to be right and healthy. The wrist injury was probably more than he let on a year ago, and that needs to be behind him. Secondly, Park needs to dictate more while at the plate. The strikeouts probably are going to continue, but if he can develop a stronger ability to command the zone, he should find plenty more opportunity to put the ball over the fence.

Just as the expectation shouldn't be that Thames continues his torrid pace, it's probably fair to assume Park has quite a bit more in the tank than he initially showed. Regardless, it would be fun to see both of these guys contributing at the highest level sooner rather than later, and there's no doubt the Twins would be better for it.
Posted by tlschwerz at 6:51 AM