A Bomb in the Middle Means Twins Must Rally 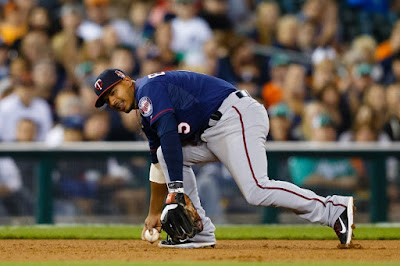 The Minnesota Twins had made it through 24 days of their spring training game schedule. Although Ervin Santana needed surgery, the timeline looked favorable and the organization had seen no other hiccups. Free agents were being amassed in droves, and the 2017 Wild Card team looked like it was eyeing an opportunity to close the gap in the AL Central. Then it happened, March 18th came.

If St. Patrick's Day is about luck, the day following saw Minnesota have next to none. Ervin Santana reportedly can not yet make a fist, let alone grip a baseball. That reality puts a May 1 return to the mound in serious jeopardy. The bigger bomb came in the early evening however, as starting shortstop Jorge Polanco was popped with an 80 game suspension after testing positive for PEDs.

When looking at the Twins 2018 outlook, it's unquestionably the loss of Polanco that impacts the club most. Despite suggesting he unknowingly ingested the banned substance Stanozolol (which coincidentally was the PED of choice for Santana back in 2015), the reality is he made a poor judgement in failing to fact check what a trainer in the Dominican may have handed him. Ideally there would've been a greater level of ownership, removing the "unknowingly" caveat, but he's decided to bypass an appeal and serve the suspension immediately. For the Twins and Paul Molitor, the question becomes where the club turns from here.

As I profiled just last week, Polanco was set to become the first shortstop since Pedro Florimon (13/14) to start back-to-back Opening Day's for Minnesota (and just the second since Cristian Guzman in 2004). Now, Molitor will likely turn the reigns over to Eduardo Escobar, who last owned the job during the 2016 season.

Escobar has played a solid utility role for the Minnesota Twins during his tenure following the swap that brought him over from the Chicago White Sox. The 1.6 fWAR a season ago was a nice rebound from the -0.6 fWAR he posted in 2016. The problem however, is that the negative number came with Escobar assuming the role of everyday shortstop.

Across 579 innings at short in 2016, Escobar was worth -7 DRS. Stretched out to a full season's worth of games (579 innings accounted for 66 starts), Escobar would be staring at a -17 DRS. Dating back to 2002 (where Fangraphs data begins), only 16 shortstops have posted a worse DRS over a full season. In fact, a -18 DRS was posted in 2012 by a 38 year old Derek Jeter, just to provide a visual for what that may look like. In short, it's not much of a surprise why the Twins played Escobar at short in just 16 games a year ago, even with the emergence of Polanco.

For Eduardo, his calling card with Minnesota has been and will continue to be his bat. His positional flexibility is relative, given that he can play many but is below average (-5 DRS in 600+ innings at 3B in 2017) at all of them. Coming off a career best .758 OPS with 21 homers, it's hard not to like the idea of his bat getting more reps. What both Molitor and the front office will have to evaluate is whether or not the negative cost in the field is outweighed by the boost his bat brings.

If not for Escobar, then Minnesota has three options currently. First would be secondary utility man, Ehire Adrianza. Profiled as a relative opposite to Escobar, Adrianza is slick with the glove and leaves something to be desired at the dish. Logging just over 200 innings at short for Minnesota last year, Adrianza was worth 1 DRS. His .707 OPS was a career best, and a massive jump from the .598 OPS he'd compiled across his first 145 career games. Having been used out of position some since joining Minnesota, Adrianza looked disinterested or lost at times while playing left field or even third base. Defensively, shortstop is his home, but his bat must prove worthy of consistent starts.

Brought in as Miguel Sano insurance, veteran Erick Aybar is now all but guaranteed a 40 man roster spot with Minnesota. Barring a Sano suspension, or injury to start the year, Aybar likely would've been looking for a new team. At 34 years old, Aybar is hardly a spring chicken, and he cuts the duo above somewhere down the middle. A .685 career OPS is reflective of a guy that's basically all average, with little boost from on-base or slugging skills. Unfortunately for him, 2015 is the last time his average was at .270 or above, and would need to be a relative baseline for acceptable production. With the glove, he's played at least 790 innings at short every season since 2009, but he's been no better than -3 DRS since 2012. Not the abomination Escobar is, calling him slick with the glove would be a stretch as well.

Rounding out the options for the Twins is a name that's not currently present. No, Nick Gordon isn't ready to fill in at the big league level on an every day basis yet (and there's valid concerns about him at SS anyways), and both Royce Lewis and Wander Javier are too far away. The "not currently present" designation would need to apply to a player outside of the organization. Veteran J.J. Hardy is currently a free agent still (though he's arguably a worse option than any of the internal trio), and the trade market has any number of fits. For Derek Falvey and Thad Levine to explore that path however, it'd likely need to be more of a stop gap player with upside, than some sort of drastic move that changes future projections.

At the end of the day, my hope would be that the Twins play it safe here. A lot of work has been done to increase the overall ability of the roster this season, and wavering too far on one side or the other could throw of a lineup or defense with an immense amount of talent. Escobar is a risk at a vital position, while Adrianza has all the makings of a rally killer. Start Erick Aybar, know what you've got, and inject both the utility men on a semi-regular basis. Escobar has thrived in that role before, and Adrianza was productive enough a year ago. It's not at all flashy, but if I'm Molitor, Aybar gives you the least opportunity to be exposed.
Posted by tlschwerz at 5:03 PM