An Outfield Up For Grabs 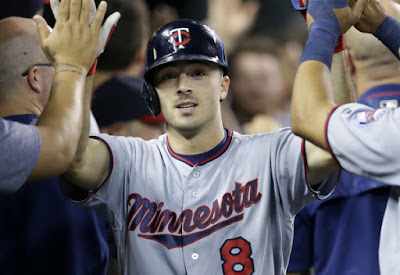 For the most part, the Minnesota Twins 25 man roster is easy to project. I tried my hand in projection 1.0 at the end of February and feel pretty much the same about that group here at the beginning of March. That being said, I think there remains one position battle of intrigue when it comes to the position players. As Logan Morrison has entered to fill the regular DH role, there's a two man race for the fourth and final outfield spot.

The incumbent is none other than Robbie Grossman. Signed off the scrap heap by the Twins back in 2016, he was an answer while Minnesota was having to send out the young Eddie Rosario. In his first 99 games with the club, Grossman put forth the best numbers of his career. An on-base machine, Grossman's .280/.386/.443 slash line in his debut year for the Twins was easily a high water mark. As an encore last season, the .741 OPS was fine for a guy that provided rotational flexibility and assumed DH duties on a semi-regular basis. While nothing jumped off the page in the average or power categories, it was again a .361 OBP that could be noted as the strongest asset.

When looking at Grossman's time with the Twins, it's never been his presence at the plate proving to be a deficiency. In the field however, it's been another story altogether. In his first 637.1 innings spanning across 2016, abysmal doesn't even begin to categorize the output. Worth -21 DRS and with a UZR of -15.2, Grossman's performance was bad enough to make even Delmon Young and Josh Willingham blush. Knowing it needed to improve, Grossman made strides a season ago. Despite roughly half the amount of innings (357.0), the numbers checked in at -3 DRS and -3.3 UZR. Robbie isn't ever likely to be above average in the field, but in 2017, he proved he can be better than a black hole as well.

That's really what the Twins have to weigh when it comes to filling out their 25 man roster. Grossman leaves an immeasurable amount to be desired in the field, and a potential replacement would be a virtual opposite. Zack Granite is a blazing (albeit not Buxton-like) centerfielder, with the ability to track balls down from well out of his reach. Arm strength isn't anything of note, but it's hardly a downfall either. In just 174 inning sample size, Granite was worth 4 DRS and 1.2 UZR for Minnesota per Fangraphs.

At the plate, Zack has just 107 major league plate appearances under his belt. Making his debut a season ago for the Twins, Granite posted a .237/.321/.290 slash line. A .611 OPS isn't ever going to get it done at the highest level, but there's plenty of reason to believe he can acclimate. At Triple-AA Rochester for the first time in his career, Granite played 71 games and grabbed 313 plate appearances in 2017. He turned those opportunities into a .338/.392/.475 slash line. While those numbers are definitely gaudy, they follow the trend of a guy who's posted consistent on-base numbers while being more average than power over the course of his professional career.

For Granite to really round into form, he'll need to display a strong level of plate discipline over the course of his big league time. At Triple-A last season, he struck out just 34 times in 284 at bats, while drawing 24 walks. Jumping up a level, he actually posted just nine strikeouts for the Twins while drawing 12 free passes over his 93 at bats. Another good sign is that a strong knowledge of the strike zone has never left him. With just a 1.9% swinging strike rate, and a 95% contact rate, no one in baseball (with at least 100 plate appearances) posted better numbers.

Paul Molitor and the Minnesota Twins will likely let the battle run it's course through the end of the spring. Granite has options left, while Robbie Grossman would need to be DFA'd to make room. As things stand currently, that's probably the biggest feather in the cap for the latter. The Twins could certainly opt to go with Grossman out of the gate, and then call upon Granite as soon as they've seen enough. If they're looking at bringing the best or most ideal 25 north however, Zack definitely has a case to be made.
Posted by tlschwerz at 6:45 AM