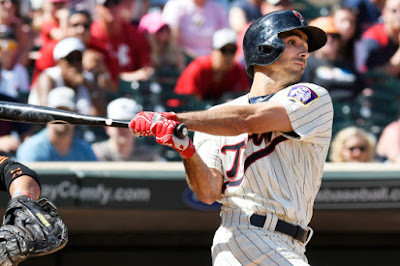 The Minnesota Twins recently broke camp down in Fort Myers and have since headed to Washington, D.C. to play their last exhibition game of 2018. With the Nationals lined up as the last action before heading to Baltimore, Paul Molitor will have to soon set his 25 man roster in stone. Given that the lineup is all but a guarantee, the bench is really the only area of intrigue.

Right now, there's two givens off the bench for the Twins. Both Ehire Adrianza and Mitch Garver are locked in. The former is a slick fielding shortstop, that has real questions with the bat. His .707 OPS across 70 games with the Twins last year was a career high, but it was also his first true big league opportunity. Without any real power, Adrianza keeping his OBP around the .324 mark of a year ago would be a nice tough. The latter is a former Minor League Player of the Year, and has plenty of thump at the dish. In 2017, Garver posted a .928 OPS at Triple-A, which followed up on a .764 OPS split between two levels in 2016. He has home run power and provides a nice platoon option from the right side with Jason Castro.

From there, things get more uncertain for both the available options and Paul Molitor. The safest bet would be to suggest both Robbie Grossman and Zack Granite are penciled in. Despite reclaiming Kennys Vargas off waivers from the Cincinnati Reds, the plan appears to again be an attempt at pushing him to Triple-A unclaimed. Ryan LaMarre has been nothing short of a superstar for Minnesota this spring, but the reality is 43 exhibition plate appearances shouldn't outweigh a 2-37 big league sample size bolstered by a career .719 OPS in the minors.

So, looking back at Granite and Grossman, the Twins have both a decision and an opportunity. Should both of those players make the club, Minnesota would have a bench of two switch hitters, a lefty, and a righty. Given a lefty heavy lineup, and two of them being corner outfielders, an area of opportunity would come in the form of a right-handed bat that can provide some thump from the corners.

Both Grossman and Granite making the club seems like an odd fit to me. Neither of them profile as hitters first, and that leaves Molitor pretty short handed when looking for something to happen in the late innings. Grossman's calling card has been his on-base prowess, but it dipped from .386 in 2016 to .361 a season ago. The last two years he's gone .696 and .994 respectively vs RHP when it comes to OPS. If the Twins believe the 2016 number is more reflective of his ability, then it makes sense to deploy him as the right-handed bat. If there's uncertainty there though, Grossman is a well-below average outfielder, that has average power, and provides no real baserunning asset.

Obviously the biggest question in going with Granite is in relation to his health. After making a diving catch and coming up with a shoulder contusion, his status is currently uncertain. If he's able to go however, he does provide the Twins with a different skillset. As a speedster capable of playing all three outfield spots, he's a plus-plus defender, and that speed also plays on the basepaths. He'd be valuable as a late inning pinch-runner and has stolen plenty of bases during his professional career. Despite an .867 OPS in 2017 at Triple-A, Granite is more of an on-base guy as well. A strong average is probably going to be his calling card as opposed to a high slugging percentage.

The safest and most expected route for Minnesota to traverse is likely to take both Grossman and Granite with them on the 25 man roster. That plan doesn't rock the boat, and represents the least amount of risk. Should Derek Falvey and Thad Levine be able to find someone either through trade or on the waiver wire, there's an opportunity to be had however. Replacing Grossman with a right-handed bat would allow Molitor to still have a defensive replacement and pinch-runner in the form of Granite, and the Twins would have a true hitting threat at their disposal.

Finding the right player to fill that role remains to be seen, but there's no doubt that the 25th man in Minnesota leaves a bit to be desired.
Posted by tlschwerz at 7:26 AM