Berrios and Rodney Tweaks are the Difference 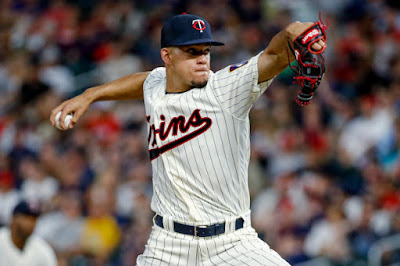 For the Minnesota Twins in 2018, two of their most important pitchers in the rotation and bullpen are Jose Berrios and Fernando Rodney. With Berrios serving as the rotation's bonafide ace, and Rodney bringing up the rear in games with a lead, Paul Molitor needs both of them to be right far more often than they aren't. Unfortunately, both have gone through a dry spell in 2018, but it appears a couple of tweaks has each right back on track.

Starting in the rotation with Berrios, we've seen both ends of the spectrum through the first two months of the season. Across his first four starts of 2018 for the Twins, Berrios own a 1.63 ERA and was allowing opposing hitters to compile just a .378 OPS against him. He tallied 29 strikeouts to pair with just five walks. For a guy who has had command issues in the past, the results were nothing short of greatness. Then however, we got to April 24th.

In the first game following his dominant outing in Puerto Rico, Berrios came up against the Yankees. He surrendered five runs on six hits in the Bronx and took his second loss of the year. Things didn't get better from there, and the four game stretch would turn ugly by the time the dust settled. From the 24th through May 10th, Berrios posted an 8.84 ERA and allowed a 1.027 opponent OPS. His stuff had seemingly left him, and it was his curveball that appeared most out of whack. Working with pitching coach Garvin Alston during a bullpen session, reports suggested the curveball had been fixed.

On Tuesday night against the St. Louis Cardinals that appeared to ring true. Berrios posted a 2,389 RPM on his curve against St. Louis, despite averaging just a 2,327 RPM mark over his previous four starts. He also got swinging strikes on the pitch 15.7% (16/102) of the time, as opposed to the 10.6% (35/330) he generated in the four starts prior. With more bite on his breaking pitch, it appeared that Berrios was back to his normal self on the bump.

Out of the bullpen, the Twins needed Fernando Rodney to make a tweak as well. Despite still throwing gas at an advanced age, it has always been his changeup that Rodney has relied upon and thrived with. For whatever reason, he decided to abandon the pitch in coming over to the Twins.

Without having conversations with the closer, it's hard to determine why he'd abandon a regular usage of arguably his most effective pitch. Given the start to the Twins season weather wise however, it's worth questioning if the snow or cold may have played an effect. Grip can be tough on a major league baseball as is, throwing in suboptimal weather conditions no doubt only increases that reality. Right now though, it appears Rodney has things back in control and is utilizing his changeup more closely to his career norms. With a 35.6% career usage rate on the pitch, it's still a bit below where he's been, but things are trending in the right direction.

The Fernando Rodney Experience is always going to be a rollercoaster, but having him pitch out of the closer role is the most optimal scenario for the Twins. Allowing pitchers like Addison Reed and Ryan Pressly to be deployed in high leverage at any point during the game is of massive value. The same can't be said about Rodney, and keeping him effective in the 9th allows the Twins to best position themselves for wins on a nightly basis.

Minnesota continuing to push the Cleveland Indians in the AL Central will rest heavily on the shoulders of both Berrios and Rodney throughout the year. Making quick tweaks when necessary is extremely valuable, and keeping their respective focuses on point is imperative for sustained success.
Posted by tlschwerz at 7:35 AM