Steady Eddie is Launching and Laughing 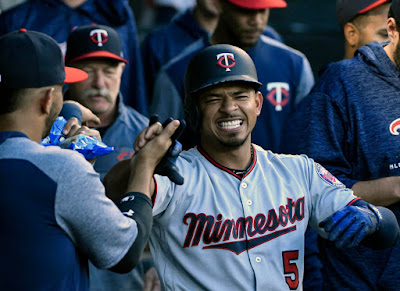 The Minnesota Twins were going to be without Miguel Sano at some point during the 2018 Major League Baseball season. Whether from a possible suspension, complications due to a rod being inserted into his leg, or the normal wear and tear a body of that size can endure, the reality is he would miss time. When that point came, Eduardo Escobar was going to be the man that filled in. What wasn't expected is that the utility man would raise the bar. Then again, maybe we should have seen this coming all along.

Back in 2015, I wrote a piece entitled Twins Cash Check Formerly Known as Francisco Liriano. The point of that article was that Liriano had run his course within the organization and was flipped to the Chicago White Sox in a move that was largely forgettable. Escobar was a part of the return however, and he posted a 2.6 fWAR in 2014. As a part time player, he'd carved out a nice role for himself and the 2015 spring training continued to carry that momentum forward. Since that point, he's posted yearly fWAR totals of 1.9, -0.2, and 1.7. Outside of 2016 in which Minnesota went in the can as a whole, he's been incredible valuable.

Now having played in 29 of the teams first 32 games, Escobar finds himself with a 1.4 fWAR (best on the team) that projects to a 7.1 mark over the course of a full season. There's next to no chance that pace continues, but for the sake of context, Joe Mauer won the MVP in 2009 with a 7.6 fWAR season. Right now, Escobar is playing like nothing short of the Twins team MVP.

The great thing about what is currently taking place for the Fogo de Chao loving infielder, is that he's not doing anything too out of the ordinary. His .341 BABIP is far from inflated, he's swinging through roughly the same amount of pitches, and neither his contact or chase rates are out of whack. His 35 home run pace is probably unsustainable, but far from crazy after launching 20 a season ago. The jump from a 12.8% HR/FB rate to a 15.9% HR/FB is noticeable but doesn't scream crazy either. If we're looking for a change, things could potentially be explained by a more gradual one.

At the time of first tracking in 2015, Escobar posted a 13.4 degree average launch angle on his base hits. Year over year, he's improved that number to 14.1, 17.1, and now 18.5 this season. Getting lift is something we've seen the game embrace as it positively correlates with the quality of hits generated. Simply put, hitting the ball harder, further, and higher is only going to positively impact an individual's overall results. Eduardo's double, triple, and home run totals seem to agree with that notion as well.

I'm not going to boil this outburst from the Twins utility man down solely to a launch angle adaptation. I think there's plenty of factors at play, but it seems apparent that his growth as a hitter has definitely contributed to the current surge. What's arguably more important in this whole scenario, is just how valuable Escobar is to the Twins roster makeup as a whole.

The talk of the offseason was in regards to how the Twins will retain Brian Dozier going into the 2019 season. My inclination all along has been that they'd either flip him for something, or allow him to walk with a qualifying offer tied to his name. Given what the market showed this last offseason, there's a decent possibility that Brian could accept that offer and return to the Twins on a one-year deal. Regardless, the totality of his age, production, and value going forward seems somewhat replaceable for Minnesota. Trying to find another Eduardo Escobar could be a more daunting task.

Over the course of a full season, fWAR totals around 1.5-2.0 are relatively easy to come by. Escobar plays many positions, but is probably below average defensively at all of them. That being said, he's a very good teammate and provides a strong clubhouse presence. He'll be just 30 years old next season, and the familiarity of backing up all over for the Twins is something he's done since he was a 23 year old. Staring at an average annual value south of $8 million or so per year, that's a commodity that Derek Falvey and Thad Levine may not be so keen on losing.

At the end of the day, Escobar is front and center regarding this Twins current turnaround. That's not to say someone else won't pick up the slack shortly, and it's a fool's errand to realistically expect 162 game averages off of this current level of production. Even at a mid-range value for Paul Molitor though, Eduardo Escobar is a player that winning teams need to have around and he's a great asset for Minnesota.
Posted by tlschwerz at 7:36 AM