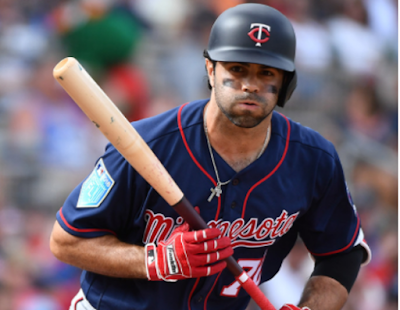 After making the hard, but correct, decision to move on from Phil Hughes, the Twins put some roster shuffling into motion. Trevor May, Ervin Santana, and Miguel Sano are all due back to the big league roster in short order. Paul Molitor's club is putting some heat on the scuffling Indians and the time to strike for Minnesota is right now. How they construct the 25 man going forward remains somewhat up in the air, but here's a few guess on what things may look like.

The outfielder is on his way back to the big leagues. After being a spring training surprise, LaMarre posted a .718 OPS across 38 plate appearances in 20 games for Minnesota. Since heading down to Rochester, he's continued to stay hot. At Triple-A, he has a .371/.436/.543 slash line across nine games and 39 plate appearances.

The Twins don't really need six outfielders on the 25 man roster, and especially not with the talent embedded among their starting trio. That said, there's really no infield options that make sense here. It's too late for Nick Gordon as Sano isn't far off, and there aren't any more veteran placeholder types to call upon. This move could be short lived for LaMarre, but he appears to be destined for the 25th spot as of now.

Jake Cave replaced by Trevor May

While noting that LaMarre's time with the Twins could be short lived, it's also true that Cave could be the guy optioned in about a week. Trevor May is eligible to come off the disabled list on May 28, and every inclination is that he'll be activated that day. Having made starts with both Fort Myers and Rochester, May has been great in his seven innings pitched since returning from Tommy John surgery. The velocity has been there, and he's posted 10 strikes (with 5 walks), giving up just one run on four hits. Yes, he's working as a starter, but I just don't see room right now.

Should the Twins tab May for the spot Hughes was occupying in the pen, he can continue to stay stretched out in working as the long man. With the ability to give Garvin Alston two or three innings of work at a time, May provides some nice bullets in relief and also doubles as a fallback option in a spot start scenario.

Just a bit further out than May, Sano's return looms for the Twins. He's yet to play a full nine innings in the field during his three game rehab stint, but that's the next hurdle he'll overcome. There's no doubt he's a big boy, and adding that wrinkle to a hamstring injury doesn't help things. If the malady is behind him though, Minnesota could use that extra thump in their lineup sooner rather than later.

Once he's fully cleared, Sano should slide back in at third base moving Eduardo Escobar back to shortstop. It's unfortunate Escobar can't hack it defensively at short like he can at third, but the bat upgrade over Adrianza should be a noticeable one.

Here's where the dart throws begin in this whole process. First and foremost, we aren't sure when Mauer will be ready to return to the Twins lineup. Going on the DL effective May 19, the Twins first basemen is eligible to return on May 29th. Given his history of concussion related issues, it's far from certain that he'll be cleared in the given 10-day timespan.

Ideally, Mauer returns in short order and provides Minnesota the Gold Glove caliber defense they've come to trust at first. It's hard to imagine he'd replace a position player, as the Twins bench would be significantly dwindled in that scenario. With eight relievers, Magill would seem to be the odd man out. He's posted a 1.54 ERA and 7.7 K/9 while owning a great 0.8 BB/9 across his 11.2 IP. A move like this would be just a tough luck situation for the reclamation relief project.

Call it a cop out, but I'm not ready to put a name on this move. Simply put, the Minnesota Twins have way too many moving parts in the starting rotation to determine who Santana will replace just under a month from now. I'd be shocked to see him before the middle of June, and making his first rehab start this week, he'll need at least three or four good turns to be big league ready.

Sure, it's an easy call if things stay like they are now. Lance Lynn being ineffective would bump him to the DL for a time and Santana could slot right in. Fernando Romero having his innings limited and being sent back to Triple-A could be an option. The real answer may have not yet presented itself and there may be an injury that allows Minnesota to have the decision made for them. The only thing worth banking on is that Santana will have a spot when he's ready. Where he slots in remains of little importance.
Posted by tlschwerz at 8:46 AM