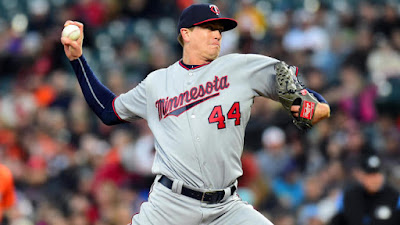 The Minnesota Twins are fully expected to be sellers at this point, and with just under a week until the July 31 trade deadline there's moves to be made. As a few teams have already started to swap assets, the hope would be that Derek Falvey and Thad Levine have taken notice. Specifically, there seems to be real value when dealing controllable pieces and the Twins have two of the best out there.

Today, the Tampa Bay Rays flipped Nathan Eovaldi to the Boston Red Sox for LHP Jalen Beeks. Beeks comes in as the Red Sox 6th best prospect per Baseball America, and Tampa netting him after just 10 starts from Eovaldi post Tommy John surgery seems like some sort of sorcery. At 28, Eovaldi has always been a guy to push the radar gun. He's sitting at 97.4 mph on his fastball this year, and appears to have regained his pre-surgery form just fine. The 4.26 ERA is backed by a 4.28 FIP while his 8.4 K/9 and 1.3 BB/9 are plenty solid. If this is the return Eovaldi commands though, what could Minnesota get for Kyle Gibson?

Still arbitration eligible for another season, Gibson doesn't hit the open market until 2020. Eovaldi checks in as a rental, and will only be with Boston for the remainder of 2018. After coming on strong in the second half of 2017, Gibson has continued to prove that he's truly turned a corner. With a 3.57 ERA and a 3.85 FIP in 2018 the former first round pick has been nothing short of a solid arm. He's also amped up his strikeout rate, posting a career best 8.9 K/9 mark while staying on pace with career norms in the walks department.

It's fair to wonder whether or not the Twins should hang onto Gibson given the likelihood that they turn things around in 2019. Despite having decent pitching depth, Minnesota would be just fine penciling the former Missouri Tiger into the top half of the rotation next season. Ideally this club is making a postseason push in 2019, and getting another strong performance out of Gibson could be integral to that taking place.

The Mets would have the two best arms on the market if either deGrom or Syndergaard were made available. I can't see either of them being moved however, and that means other organizations have an opportunity. If Falvey and Levine are fielding calls on Gibson, a significant haul doesn't appear to be out of the question.

In the bullpen, Minnesota finds another premiere asset. Ryan Pressly has been one of the best relievers in all of baseball this season. He owns a 3.45 ERA with a 2.99 FIP. Jumping up his strikeout total each season, he's at a career best 13.0 K/9 in 2018. That mark puts him 9th among MLB relievers, and above guys like Brad Hand, Felipe Vasquez, and Sean Doolittle.

Much like Gibson, there could be little incentive for Minnesota to deal Pressly. The former Rule 5 pick has another year of arbitration eligibility and also hits the market in 2020. A focus this offseason was to revamp the bullpen, and removing Ryan from it would hurt big time. That said, Jon Morosi recently reported that the Marlins told Boston neither Jay Groome or Michael Chavis along would be enough to acquire their reliever Drew Steckenrider. While Steckenrider has more team control than that of Pressly, they're very comparable pitchers.

At the end of the day I'd be relatively surprised if either Pressly or Gibson was moved. Given the expectation to compete next season, having both of those players on the roster would be beneficial. Moving assets like Brian Dozier and Eduardo Escobar makes much more sense, and should be the focal point of the next few days. Then again if a team comes calling on Gibson or Pressly, ask for the farm and remain grounded in that.
Posted by tlschwerz at 9:51 AM