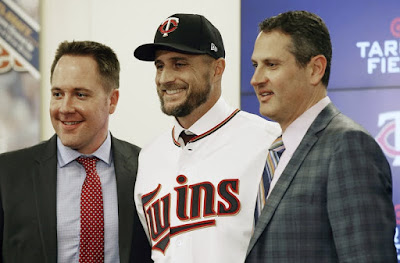 Calling the Minnesota Twins 2018 performance disappointing would be selling it short. After jumping up to an unexpected 85 wins in 2017, and a Wild Card appearance, the team took a step backwards last season. Byron Buxton and Miguel Sano gave the club nothing of substance, and Paul Molitor was canned while the organization looked for answers. Derek Falvey and Thad Levine have provided a blueprint that they have confidence in, and here’s why it could turn into a surprise story on the diamond.

More than any free agent, I’m convinced that the Twins current infrastructure is better than it has ever been. Falvey and Levine have left no stone unturned when it comes to talent focused on development, and I love what that means for the organization. Rocco Baldelli appears to be someone that can connect with a clubhouse of youth on a better level than Molitor may have been able, and his staff seems constructed with that in mind as well. Derek Shelton helps to bring continuity, while Tommy Watkins is a familiar face for many of the Twins young core. Wes Johnson is heralded as a pitching guru at a similarly high level of the game, and Jeremy Hefner marries that with a major league feel. Add in the talent infused on the minor league side, and things are looking up throughout the system.

Avoiding situations where players aren’t given the ability to buy in or understand the why behind the what is certainly a key portion of the analytical age. This front office is forward thinking, and while that is great on paper, the key is getting it to translate on the field. Minnesota now has people in place to not only teach the difference, but also help to incorporate it in a results-driven manner. Whether or not we see it completely pay off this season or down the road, the infrastructure of the organization should draw excitement that it has never previously warranted.

When it comes to the lineup, Minnesota lost only Joe Mauer and Brian Dozier from the 2018 squad. Although Mauer was a defensive (and on-base) asset a season ago, the replacements provide a realistic vision for growth. C.J. Cron, Jonathan Schoop, and Nelson Cruz all should provide a step up in offensive production. Hedging bets all over the place with the bargain that is Marwin Gonzalez only continues to be a boost for Baldelli’s overall goals.

Internally, the most important players have nowhere for production to go but up. Jorge Polanco played in just half of the team’s 162 games, Buxton had a season lost to injury, and Sano displayed a lack of commitment that finally caught up to him. Sure, Eddie Rosario likely flashed something close to his 100th percentile, but Max Kepler has yet to put it all together as well. Getting a more middle-of-the-road baseline from that group does nothing but raise the overall water level.

There’s something to be said about being the reigning champ, and it’s always going to be on someone else to knock you off. The opportunity has never been riper than it is right now. Career years were had by Trevor Bauer, Jose Ramirez, and Francisco Lindor. Losing Lindor from the get-go is beyond suboptimal and starting with a collective cast that has taken steps backwards should be felt in the standings.

It’s not as though Terry Francona’s group is falling off a massive cliff, but it also wasn’t as though they were a stalwart coming into these new circumstances. Minnesota went 9-10 against the Indians last season but had a run differential of -14. Facing many of the same faces, with a lineup that’s a bit more watered down, a swing here or there could end up being a difference maker.

I realize the rose-colored glasses this could all be viewed as, and maybe the homerism wreaks a bit too strong here. I think there’s a certain level of realism present in every aspect of the opportunity as well. If things are going to blow up, I’d imagine it will be for less of the reasons stated above than it will be the one aspect of the offseason that has me from sending roses to Falvey and Levine at 1 Twins Way: Pitching.

Still a bit south of the Opening Day payroll in 2018, the front office has largely dismissed any substantial pitching upgrades for this club. Blake Parker does bring more talent than we saw at the bottom of the pen a year ago, and it’s hard not to get excited about a healthy Trevor May or a short-stint Fernando Romero. Martin Perez rounding out the rotation is a head scratcher, but there is at least a handful of dart throw depth types behind him.

There could be a move made to support the pitching staff prior to the season starting, or that could be an explored avenue for a trade when we start to see the win column fill up. What would be disappointing is to see the positive efforts wiped out by what takes place on the bump.

At the end of the day, I think the trio of positives leading this piece off are too much to ignore. In 2018 the Cleveland Indians won a terrible AL Central with just 91 wins. The bottom of the division has gotten better, and Minnesota is the only club that made necessary moves to suggest hope in grabbing some additional victories. The branch may have broken by July, but I’m out here standing on it. Give me Rocco Baldelli, in his first year as Minnesota skipper, pushing the Twins to 92 wins and an AL Central Division title.
Posted by tlschwerz at 10:10 AM