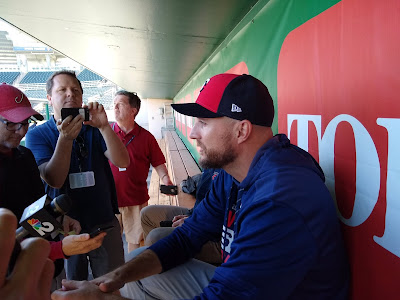 Down in sunny Fort Myers, Florida the Minnesota Twins pitchers and catchers have officially reported, and practice is underway. With many position players either already in camp, or soon to join them, real game action is not far off. Attempting to decipher how Rocco Baldelli will shape his first major league roster should be a fun exercise and doing a first projection before we see anything take shape is plenty exciting.

In past seasons there was some level of continuity with how Paul Molitor wanted his roster to look. The front office had influence, but it was the skipper that ultimately was responsible for the 25 men that headed north. Now having to get used to a new process, we’ll have to figure out how the former Rays star feels about organizing the ends of his roster.

For your first Opening Day roster projection of 2019, here’s how I see the Twins embarking upon Target Field:

Barring another signing, this group looks to be inked in pen. The Perez signing is a head scratcher, and he was better in relief for the Rangers in 2018. That said, the front office has been bullish about him being their 5th guy, and none of the depth behind him makes that a ridiculous proposition. Minnesota could still go out and acquire another arm, with the bar being relatively low, but today this is where we’re at.

The Twins bullpen was an area capable of improving the most going into 2019, and while it’s ok, there’s still plenty of uncertainty. Rogers looks like a very reliable, and high-quality arm, while May projects as one of the better relievers in the division. Reed is a prime candidate for a bounce back year and Hildenberger has flashed plenty of potential in his previous exploits. Mejia is out of options, and I’d imagine the Twins won’t move on without reason. Really the only question here is what happens with Romero. Ideally, he still gets developed as a starter, but he could very well be an elite level reliever right now.

Going into the year Castro will get the lion’s share of the reps but seeing that swing as the season goes on would not be a surprise. Garver needs to take steps forward defensively, but the bat is impressive and needs to be in the lineup often. He was under-utilized at times by Molitor, and that’s hopefully not a path Baldelli goes down. There’s no Willians Astudillo here which will disappoint some, but his days as a catcher could also be limited.

There’s not much question regarding the starters around the diamond. I could listen to an argument that Duda and Tyler Austin make up a platoon that pushes out Cron, but I don’t think there’s much steam to that. The front office made upgrades at both first and second base this winter, and the returning tandem of Sano and Polanco looks enticing on paper. Adrianza will once again play the utility role, and Duda as a platoon partner and bench bat makes a good deal of sense.

Like the infield, Minnesota’s outfield is all but set in stone. The corners are well established, and Buxton will return to start in center. This needs to be the campaign in which he puts it all together, and that taking shape could lead to his first All Star appearance. Nelson Cruz is going to be a full-time DH but could see time in the field during interleague play, although everyone would probably prefer that doesn’t happen. There should be worry about regression from Cave this year, and that could open the door for another suitor, but he’ll have the role to start.

Posted by tlschwerz at 8:43 AM