Topps with a 1970 Throwback 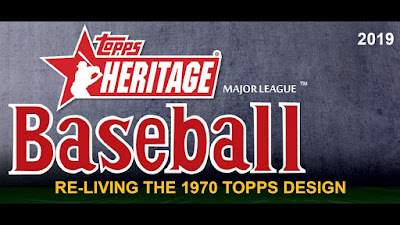 Although it’s Series 1 that kicks off a new year of baseball card collection each season, it’s the early year release of Heritage that is often seen as the first big product. Heritage carries a promise of being a throwback to yesteryear, this time 1970 specifically. Producing some of the most desired rookie cards, and short prints in all the collecting landscape, this product is one Topps knows you won’t want to miss.

Much like Series 1, Heritage isn’t designed as a massive hit factory. The biggest pulls in this product have more to do with photo variations and differing parallels. Although Topps has changed to define what each different type of card is on the reverse side in recent years, slow rolling through packs to spot differences helps to add appeal to this set.

For the Minnesota Twins specifically, there’s a lot to like in 2019.

There are 13 different players in the Twins base set, and they are delivered on 11 different cards. Heritage represents the first time C.J. Cron, Nelson Cruz, and Jonathan Schoop will be in Minnesota uniforms. Although Kohl Stewart had his first rookie card in Series 1, both Willians Astudillo and Stephen Gonsalves will make their Topps rookie debut on a three-person card joining Stewart. Continuing with the tradition of short printed base cards, Minnesota has two entrants in the 100-card grouping. Schoop’s first Minnesota card is short printed, while he’s joined by Jose Berrios.

A set utilizing a throwback theme, Heritage has remained consistent with many of the insert offerings transferring from year to year. Jim Perry and Harmon Killebrew are paired with current stars on three different Then & Now cards, while Rod Carew is included in the Baseball Flashback set. Sitting somewhere in between an insert and a hit, Joe Mauer is offered on a 1970 Poster Boxloader.

For Twins fans looking at the big chase, there’s a bit of a letdown here. Both Schoop and Berrios are in the new Silver Metal run, which are serial numbered to just 70 copies. Eddie Rosario joins the duo as the three Minnesota offerings among the base mini set, all serial numbered to 100. The crown jewel of Heritage has always been the Real One autographs, and this is where fans may have wished for more. Bert Blyleven and Rod Carew are the only single signed cards. The former isn’t a hobby darling, and the latter is hitting collecting fatigue with autographs in virtually every product currently produced.

Branching out a bit to a bit tougher pulls, there are two separate cards that should turn out nicely. A dual Real One autograph features Carew and Rosario together, hand numbering, and likely a very small print run. There’s also a Real One triple autograph that features Byron Buxton, Torii Hunter, and Carew. Buxton has had Real One autos recently in Heritage, but Hunter getting back into the game is something of a nice development.

Relics will remain aplenty in Heritage and the Twins are represented there as well. From the 1970 mint coin cards to the postage stamp offerings, you’ll find plenty of throwback flavor. Cut up pieces of Eddie Rosario’s game worn jersey can also be expected as part of the Clubhouse Collection relics.

All in all, 2019 Topps Heritage is shaping up to be a fun set once again. The 1970 design won’t be a favorite for all, but this should be a fun set to build. The autograph portion of the program is a bit of a letdown for Twins fans, but there’s enough meat here to draw in other excitement. Look for the product in both hobby stores and on retail shelves February 27.
Posted by tlschwerz at 7:53 AM