Moving Eddie Rosario, but Where? 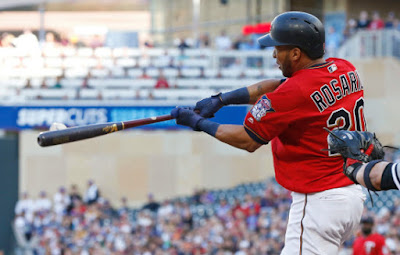 If there’s a lineup fixture from the 2019 Minnesota Twins that Derek Falvey should look to move before 2020, it’s Eddie Rosario. Despite lacking outfield depth down the stretch, the organization should be flush with options in the coming season, and a cheap commodity could be picked up on the open market. When trying to capitalize on return, this is the time. The elephant in the room is whether any of the other 29 teams see adequate value.

You’ll quickly hear that Rosario hit a career high 32 dingers this season, and he plated 109 runs. His .276 average was the lowest it’s been since 2016, but his .500 SLG just missed being a career high. Entering his second year of arbitration eligibility he’s projected to get just shy of $9 million (per MLB Trade Rumors), and performance would only create an increase from there. If we stop at that then there’s little reason not to be enamored by his performance.

It’s when you consider that Rosario produced just a .300 OBP, .329 wOBA, and 103 wRC+ (100 is league average). He’s still the guy that doesn’t walk at all (3.7%) and has no relative clue where the strike zone is (46.3% chase rate). In the Postseason he was an absolute abomination, and even his “good” production in game three came through pitches he had no business generating positive results off. Unfortunately stepping out of the batter’s box doesn’t make it any better.

During his debut season Rosario posted an 11 DRS in the outfield. His 16 assists were reflective of a strong arm and astute mind that constantly had him in position to make a play. His arm still performs above average (he had 8 assists in 2019) but the DRS dropped all the way to -8. He posted a career worst -5.6 UZR ranking 44th among 50 qualifying outfielders. Often looking disengaged, and if not then overmatched, defensive prowess is no longer a calling card of his.

When Falvey and Thad Levine approach the opposition this winter, they’ll be looking to engage trade partners for pitching. Dangling Rosario as a preferred trade chip, they’ll be working with the premise that the best is yet to come. Their sell must be in the form of a 28-year-old still waiting to hit his peak, and one that can do significantly more than his 1.2 fWAR this season. At $9 million he’s no longer a cheap commodity, and team control isn’t appealing if Rosario becomes a non-tender player a year from now.

You can bet that those in the game are smarter than getting sucked in by hollow production stats largely derived by the 127 starts out of the cleanup spot. Minnesota won’t likely see the return they seek in a one for one swap and making Eddie the foundation of a deal could result in a project or fresh situation type of return. There’s nothing wrong with both sides in a trade coming out as winners, but unlike the Aaron Hicks deal of a few seasons ago, it’s Minnesota that will be pawning off promise as opposed to projectable production.

Rocco Baldelli probably isn’t thrilled about the idea of rookies Brent Rooker, Trevor Larnach, or Alex Kirilloff starting in the Opening Day outfield for a team coming off 100+ wins. Those prospects could immediately force play their way into action though, and a veteran presence manning the fort vacated by Rosario until they are ready is hardly a difficult ask. Much like Byron Buxton being mentioned in talks for the Mets Noah Syndergaard, Rosario was representative of an immovable asset during the season. While Buxton is still untouchable for a handful of reasons, it’s Rosario that now is unprotected by current clubhouse chemistry.

We will sit on wait on a potential deal to be consummated, but while we do there must be an understanding that the front office will need to be astute salesmen while getting any swap done.
Posted by tlschwerz at 12:55 PM