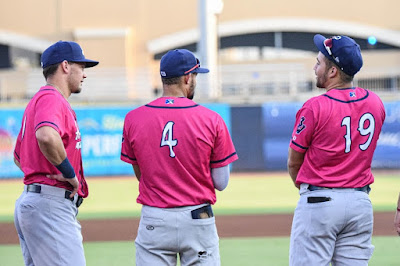 It’s really weird to be providing a midseason update on Minnesota Twins prospects when not only has a Major League game not been played, but the Minor League season is all but cancelled as well. There hasn’t been anything of substance to look at, although my thoughts on a few players have shifted.

I can’t say that I derived anything of considerable substance from the week I spent watching back fields action down in Fort Myers, but there’s also been a (very brief) Major League Baseball draft that put some fresh talent into the organization as well. 2020 has been anything but normal, so let’s embrace the goofiness and get underway with the rankings.

Losing a full season of Minor League Baseball may hurt no one in the Twins system more than it does Wander Javier. An elite talent who has fallen completely off the map since Rookie Ball, Javier is coming off a dismal .601 OPS with Cedar Rapids in 2019. He’s still just 21, but a year of missed development and wanting to distance himself from a season ago isn’t ideal.

I really like Canterino and think he can continue to push up these rankings as a relatively high floor prospect. He’ll be 23 next season, but he put in a very impressive showing to start his pro career. Working 25 innings after 99 in college is a nice taste, and clearly the Twins were impressed skipping him over the Appy League. He should start at High-A Fort Myers in 2021.

Part of the package returned for Ryan Pressly, Celestino was originally viewed through the lens of being a plus defender. While that remains true, he reached High-A Fort Myers last season and posted a .759 OPS. The 10 home runs were a nice bit of power, and if that comes along with his speed and defensive abilities, he’ll rocket up this board. There’s clearly a reason why Minnesota wanted him on the 40 man this winter.

I’m higher on Wallner than most I think, but he is a bit more than the traditional booming bat the Twins have. There’s athleticism here and he can play on the corners in the outfield. His arm is massive, so right field makes a lot of sense. He was already looking like an advanced hitter, so the wiping out of 2020 may not hurt him as much. There’s always fallback potential here that he could get on the mound.

Continuing the mold of targeting thunderous bats, Minnesota went with arguably the best power hitter in the draft during 2020. Sabato can launch the baseball, and he’ll absolutely have to with little to now defensive value. The expectation is a big leaguer at worst here, with some serious thump as a consistent and regular producer.

Rooker could see time on a taxi-squad for the Twins in 2020, and it’s not hard to wonder on as his bat is ready. There’s uncertainty as to where he’ll play given mixed reports on abilities in the outfield and at first base, but the bat should hold its own. He’s got a different build than Sabato, but all of the same power is there.

Keeping Cavaco back for me is just how lost he looked at the plate in his debut season. The K/BB ration was nightmarish, and that’s the bigger story than where his slash line was for me. I think he really needed to get back on the diamond and in the swing of things for some positive steps forward. Obviously, this is still a first round talent, but it’s a wait and see approach for me.

One of the biggest movers nationally in the Twins system has been Jeffers. He went from a bat first player that may not be able to catch, and now is considered multi-faceted within the organization. The receiving and throwing skills have sharpened, and nothing has slowed down with the bat. Like Rooker, Jeffers could be on the taxi squad for the Twins, and probably is a better option behind Alex Avila in the hole than Willians Astudillo.

Minnesota saved money on some earlier picks to grab Enlow given the promise they saw in him. So far that’s been greatly rewarded. He’s been a consistent arm, and while not dominant, has gotten it done at every level. Would like to see a few more strikeouts, but there’s a mid-rotation upside here. Another guy that could factor in depending on how big minor league depth goes for 2020.

2020 was going to be a big year for Thorpe and it’s taken on quite a different shape. He was away from Spring Training getting reset for a couple of weeks and then look ticketed for Triple-A Rochester. With the situation as it is now, he could be an extra long man out of the pen. His stuff was better than the numbers said in 2019, and I think there’s legit stuff to dream on from the Aussie lefty.

The way 2020 has gone, and the limited season may actually accelerate Duran’s pro debut. I assumed it would come this year, but that wasn’t a lock. Expanded taxi squads and roster could certainly make an arm this good worthy of a relief look. He’s going to start in a traditional year. The near triple-digit stuff plays from the get-go. Bring him in as a middle reliever might be a nice boost for Rocco Baldelli, however.

I’d bet heavily on Larnach showing up at the Major League level in 2020. He’s an advanced hitter and works the zone well. He’s held his own during Spring Training action and watching him launch a ball on his first big league at bat was a lot of fun. He’s the most likely of the Twins power prospects to remain in the outfield. Good athleticism, although it will play better on the corners.

This season will present somewhat of a weird spot for Balazovic. I think he’s best utilized as a starter and not sure how much his stuff plays up in the pen. He’s got a legitimate shot to be top half rotation arm and pairing him with Jose Berrios down the road could be lots of fun. The Canadian has received lots of praise in the past calendar year and the stuff absolutely warrants it.

Plenty can still make the argument that Minnesota’s top two prospects are interchangeable. I have Kirilloff second because once he moves off an outfield spot (as he already has) first base provides less value. He’s a pure hitter, he’s going to hit for average, and the power will be there as well. He was going to be ready at some point in 2020, and no we’ll likely see it sooner rather than later.

Lots of ups and downs for Lewis on the farm last year, but he ended on fire as the Arizona Fall League MVP. There’s going to be concerns about the leg kick until he consistently puts it together, and plenty still wonder if he’s not better suited for centerfield. Regardless, he’s going to play a premium position and looks the part of a perennial All-Star.
Posted by tlschwerz at 12:35 PM