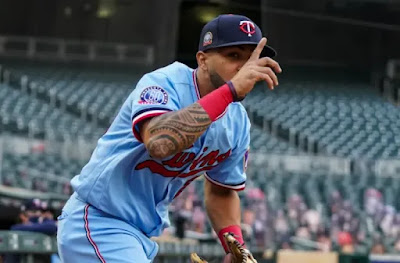 If the Twins number one decision this winter is whether or not to re-sign Nelson Cruz, the second most important may be what to do with left fielder Eddie Rosario. The home-grown prospect is due for a raise in arbitration and at a project $9 million or so, it’s down to crunch time.

Eddie Rosario’s all but established as a big-league veteran by now, but it’s also well known what his production profile looks like. He’s a free swinger that has the ability to do damage while leaving a significant amount of opportunity on the table. He’s a poor on-base hitter, and defensively he’s rarely completely checked in.

After admitting to his shortcomings publicly this offseason, Rosario committed to making strides defensively and showing better plate discipline. In the shortened season that was, it resulted in a 16-point increase to OBP (.316) and a 9 run DRS swing (+3). Given the muted amount of games and innings, the defensive mark was on pace to generate a career best DRS tally with a UZR to follow suit. He also posted five outfield assists in just 51 games. Still people attempt to run on his arm.

What Minnesota must decide is where they project Rosario going forward, and what they logically see from the alternative options. At 29-years-old it’s entirely fair to argue that this is where the Puerto Rican enters his prime. Unfortunately, that more often translates to enhanced production based upon current trends rather than an ultimate change in approach. In other words, the lack of strike zone command isn’t going to suddenly get better because of his peak physical stature. Entering the final year of arbitration, there certainly could be added motivation as he looks for that first big contract.

On the alternative options front the Twins likely need to look no further than their internal assets. Alex Kirilloff made his Major League debut in game two of the American League Wild Card series against the Houston Astros. If I were a betting man, and I am, seeing Kirilloff return to the minors in 2021 seems unlikely. He’s a natural corner outfielder and appears ready to assume that role immediately. Although the arm doesn’t profile the same, Kirilloff is a vastly better hitting prospect with both plus on-base and power skills. Brent Rooker needs a role, although is less certain with a deeper floor, and top fellow prospect Trevor Larnach is near-ready as well. Add in LaMonte Wade and Jake Cave being capable options and you’ve got yourself a stable.

I don’t see Minnesota getting a ton for Rosario in trade. He’s under team control for just one more season, and teams (as would be the case for the Twins) likely aren’t lining up to pay a career .788 OPS guy over $9 million. Non-tendering Rosario would seem like a misstep but only given the uncertainty as to where that financial commitment goes. If the Twins can allocate those funds to another player filling a separate need, then so be it. You’d have a hard time spinning a non-tender as positive if the money goes unspent, however.

Last offseason seemed like a prime opportunity to trade Rosario. He was coming off of MVP votes and posted his third straight season with an OPS at .800 or above. When that didn’t happen, the future became a bit murkier. It’s hard to lean one way or another without having the other part of the decision-making process in hand as well, but this is a storyline to watch over the winter.

Posted by tlschwerz at 7:35 AM