What If We Lacked Objectivity With Twins? 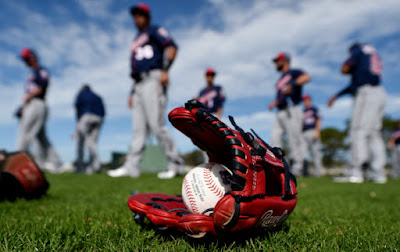 Leaving an early morning meeting this morning, I had the opportunity to catch a bit of Judd Zulgad and Phil Mackey on their daily radio show. The 1500 ESPN co-hosts were discussing the UFC reporter that was banned for life because he broke a story prior to the organization deeming it was ready to share the news. In having the discussion, and important topic came up, and it's one that directly effects the Minnesota Twins.

As both Mackey and Zulgad broke it down, the pair dissected how unfortunate it would be should news only be filtered from first party outlets. If the UFC, or in our case, Major League Baseball (and it's teams) were the only ones presenting us with content, the landscape would look vastly different.

Considering the landscape the Twins currently call home in Twins Territory right now, fans have options. There's at least two major sports stations, there's the Twins website itself, there's a handful of blogs (like this one that I appreciate you reading), and there's any number of personalities on Twitter (like this one that I'd hope you'll follow). In understanding that however, the realization should be in how information is presented.

On the Twins website, you'd be hard pressed to ever find a story pointing a public finger at an individual or situation (16-40 record notwithstanding). On Twitter or on this blog, you'll find someone willing to equally praise and come down upon the club when needed. Heck, on some of the local sites, you'll find writers that lean one way, while others do little but to regurgitate the same team-centric attitude. As a whole, none of it is wrong, but if mandated, it all would be.

Take a look at the state of the Twins currently. Terry Ryan and Paul Molitor have constructed and ran out a team that has won 16 games in 56 opportunities. Fellow major league competition, the Chicago Cubs, have equaled as many victories in the same amount of time as the Twins have earned losses. There has been no shortages of blame to go around, or problem areas to take a look at. Over the course of the season's first two months, outlets have had the opportunity to cover both situations.

We saw a reporter fairly question Phil Hughes pitching despite not having the ability to do so in the capacity he should've been expected. I've been critical or both Ryan and Molitor in this space, and there's been plenty made of the Total System Failure quote in the Twittersphere. On the flip side, Joe Mauer's resurgence has been praised, Byron Buxton's new approach has been heralded, and the good has been found. The allowance of both sets of narratives is what creates a level of content designed to benefit the consumer.

At its core, sports are a form of entertainment. During their program, Mackey noted that media access was generated in its truest form to create a level of accountability and transparency between teams and their fans. He's not wrong at all, and that line being blurred wouldn't be a positive scenario for anyone involved. Leagues and their organizations becoming a monopolized form of access would provide fodder with little meat to it, while just barely scratching the surface of what truly envelops a fan's interest.

Thanks to the avenues out there, you're currently able to consume sports, and the Minnesota Twins in the way in which you choose. If you want nothing but what the team deems appropriate, TwinsBaseball.com is for you. Looking for something in the form of analysis, with happy go lucky sprinkled in, there's a local site for that. Want someone to be as passionate when things are good, as they are when things are bad, well I think I've got you covered there. Regardless what your choice is, you're currently allowed to make it.

Right now, the Minnesota Twins, Terry Ryan, Paul Molitor, and everyone at 1 Twins Way is falling flat. They should be held accountable for those actions, and it's the responsibility of those sharing their thoughts on the situation to do so. Despite baseball not having yet taken the drastic measures that UFC showed us over the weekend, it should probably provide a reminder as to how good the current situation is, and what the expectation to come out of it should be.

Consume your fandom to the level in which you please, but also be aware enough to know that it's worth protecting.
Posted by tlschwerz at 10:32 AM