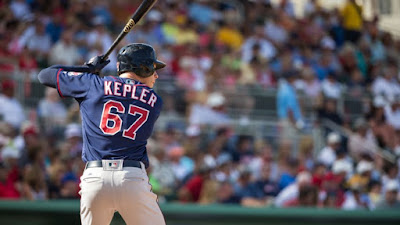 Recently, Byron Buxton was brought back into the fold for the Minnesota Twins. I've talked plenty about why I think he can stick this time, and how Buxton along with Miguel Sano, can begin to usher in a new era for the Twins. It's in the latest outfield roster move that continues to further cements the Minnesota future though.

In a game against the Oakland Athletics, Sano was trying to hustle out a grounder to break up a double play (he ended up being safe), but unfortunately pulled his hamstring in the process. The hulking star was lifted from the game immediately, and Oswaldo Arcia took over as a pinch runner.

With Sano injured, and a disabled list stint now on the docket, Max Kepler is back in the fold for the Twins. What absolutely has to take place for the German-born prospect however, has to be nearly the opposite of what took place at the beginning of the 2016 Twins season. Having been recalled from Triple-A Rochester just two games into the year, Kepler was making his 2016 debut with Minnesota. Unfortunately, skipper Paul Molitor asked him to ride the bench in 12 of the 14 games he was present with the parent club. That's a mistake that should be avoided this time around.

Over the course of his minor league career, Kepler has dealt with his fair share of injuries and missed games. However, when healthy, he's been one of the most reliable all-around prospects in the Twins system. Despite not having the ceiling of uber-prospect Buxton, I'd wager it a fair suggestion that Kepler may have a bit higher floor as well. There are few things that Kepler doesn't do to at least an above-average level, and the patience in his game should translate well to the big leagues.

A career .281/.363/.446 minor league hitter, it's really been the past two seasons in which he's put it together. At Double-A Chattanooga in 2015, Kepler owned a .322/.416/.531 average while racking up the Southern League accolades. This season at Triple-A Rochester, after knocking off the rust Molitor put on him to start the year, he's batted .365/.452/.587 since May 7 (17 games). Kepler is capable of playing all three outfield spots, and has speed that is often overlooked as an asset in his game.

Considering the Twins current roster construction, replacements in right field for Sano come down to either Arcia or Kepler. While it's understandable to want to get the Venezuelan some time, he's been used sparingly as a player out of options on the season. It appears that Arcia's future with the Twins may be as a bench bat at best, which means Kepler should be given the opportunity to run as a regular.

We've seen this scenario play out not too long ago for the Twins. Molitor was handed a two week trial of Jorge Polanco when Eduardo Escobar hit the disabled list. He squandered the opportunity by getting him very few starts, and really didn't find out anything about Polanco at the big league level. The same can't play out again with Kepler. Knowing Sano will miss at least the next 15 days for the Twins, Molitor needs to get Kepler regular starts, and allow him to settle in. A positional shuffle may need to take place if Kepler hangs onto the job, but that's absolutely the kind of forced hand a bad team should be welcoming with open arms.

Right now, the Twins have a trade candidate in Trevor Plouffe, a struggling designated hitter in Byung Ho Park, and a defensive liability in Miguel Sano. Musical chairs can be played among the three of them, but that thought process can be shelved for a while. It's Kepler's turn to show off his ability to be paired with Buxton for the Twins foreseeable future. We just have to hope Minnesota doesn't get in its own way.
Posted by tlschwerz at 6:42 AM