The Twins Chips Ready To Move 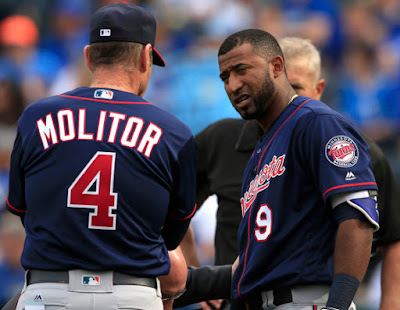 It's June, and the Twins are the worst team in baseball. They've currently been swept half as often as they have won games, and this season has gone the opposite of any expectations could have laid out. With a couple of months left to the trade deadline, it may be time for Terry Ryan to start sending his chips to the table. Minnesota doesn't have many any big names, but there's pieces that are worth moving.

Despite Major League Baseball dictating trades being allowed (in the traditional sense) up until July 31, the Twins would be best served to act well before then. As a handful of their current commodities may have short shelf lives, moving them prior to any downfall would be a good idea. If you've begun reading trade pieces on the interwebs at all, you know who is considered as trade chip for Minnesota, but I'm prepared to tell you who the club should move.

With that said, let's get into it.

Easily Ryan's best free agent signing of the offseason, Abad came in as a non-roster guy that the Twins believed they saw something in. Commenting that he was tipping his pitches, Minnesota thought that the 4.15 ERA in 62 games for the Athletics in 2015 was an outlier, turns out they were right. Currently, Abad owns a 0.93 ERA in 19.1 IP. He's posted an 8.4 K/9 and walked just 2.3 per 9, a career best.

Abad is a lefty reliever capable of getting batters from both sides out. He's a luxury that the Twins don't need to afford. Their pen is bad, and so are they, his value doesn't push the needle much. Sending him to a contender to solidify their pen is the most realistic plan of action, and he should have plenty of suitors.

If there's a reason the Twins shouldn't send Nunez to the All Star game, it's because he shouldn't be with the organization when that time rolls around. Considering Abad a must trade, Nunez should be considered a must trade now.

I'm not in favor of taking a bag of balls back for Nunez, but his value is never going to be higher than it is currently, and waiting only invites the opportunity for it to fall. Nunez's .329/.356/.494 slash line is well above his career norms (.274/.314/.401) and he's continued to be a poor defender. For now, he's been one of the lone contributors on a bad club, and making sure to get some return on that is a good plan of action.

There's reason to believe a return for Nunez won't equate to much, he's got a decent track record that says this is a mirage. That being said, if someone is willing to cough up a mid-level prospect, the Twins should be all over it.

Despite making few well timed moves during the offseason, and a poor display of roster control throughout 2016, Terry Ryan seems to have come up well with Grossman. The 26 year old is finally doing something he never has before, hit. An on-base machine, Grossman's bat has turned in a .359/.457/.667 line over his first 12 games with the Twins. He's already amassed 6 doubles and has two homers to his credit. Right now, Paul Molitor and crew have to be hoping the carriage doesn't turn back into a pumpkin.

Sure, Grossman is 26, and not arbitration eligible until 2018. The team control he possesses makes him valuable if you believe this sort of thing continues. However, he was cast aside by the Astros for a reason, and couldn't find his way into the Indians plans. Grossman will probably always find ways to get on base, but betting on his bat is a risky gamble.

With the ability to be a 4th outfielder at worst, I'm not going to simply give him away. I'd rather have Grossman in the organization as opposed to a retread like Darin Mastroianni in a pinch. However, Minnesota should be able to find a contender needing that type of lift immediately, and could maximize their return by flipping the recently claimed asset.

Over the offseason, my number on Plouffe would have been a 4. I am of the belief that Miguel Sano has been virtually as expected in right field, and while some may see that as an abomination, I'd put it as simply below-standard. Sure, playing the hulking Dominican in the outfield is about as suboptimal as it gets, but the Twins and Plouffe were tied to each other.

Despite coming off a solid season for the Twins, Plouffe's winter trade market was non-existent. David Freese settled for nothing with the Pirates, and the Twins watched that all play out. The reality remained that Plouffe was more valuable to Minnesota than he was to anyone else. The unfortunate thing now is that I'm not sure that has changed.

As much as I've been ok with sano in right, it's probably time to get him back on the dirt. Plouffe though, has hit for a career worst .648 OPS and he's walked significantly less than at any other point in his career. The power numbers haven't been there, and he's merely capable at third. I'm for dealing him to open up the roster spot, and get Sano to a more comfortable position. The problem I see is that the market may dictate the Twins simply give him away, and I'm not sure that's the best plan of action.

Only two guys fall into this category for me, and it's the combination of Phil Hughes and Ricky Nolasco. Remember, the numerical values represent the level of trade necessity for the Twins. I can't see either pitcher being coveted, but I'd look to move both for whatever you can get.

Nolasco was poor money allocation from the get go, and Hughes' contract extension has turned out to be a significant blunder. The Twins have starting depth, even if it isn't all top tier, but opening up the roster spots and freeing the case is a plus in and of itself. Nolasco needs to go back to the National League, and Hughes may very well be pitching hurt. There's no real scenario in which I want to lean on either guy going forward, and offloading them makes that much easier.

I can't imagine the Twins would be getting much, if any, of a return for Hughes or Nolasco. With Ricky, they may have to eat some money, and Hughes' extension pays a hefty price tag if he continues to trend the way he has. Ryan should be making it his mission to call, unload, and move on from the pair in whatever way possible however.
Posted by tlschwerz at 7:45 AM