Buxton Back, But Why? 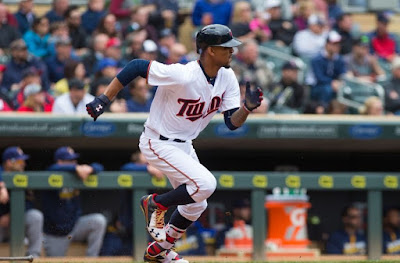 As Major League Baseball allows big league teams to expand their rosters to 40 players come September 1st, it was probably a good bet the Twins would recall Byron Buxton. He was a consensus top prospect in all of baseball, and is absolutely vital to the Twins turning the corner. In calling him back up to the big leagues though, you have to wonder what the plan has been for the Twins as it relates to Buxton.

2015 was a tough debut season for the Twins centerfield phenom. He played in 46 big league games and slashed a measly .209/250/.326. This season, he has followed that up with a .193/.247/.315 line in 63 big league games. The biggest issue for Buxton hasn't been the statistical line though as much as it has been his ability to put the ball in play.

Through 2015 in the minor leagues, Buxton had never struck out in more than 26% of his at bats. At the big league level a season ago, he whiffed 34% of the time. It's obviously to be expected that the highest level of competition will provide the toughest test, so his number rising was far from unpredictable. In 2016 however, Buxton has fanned 41% of the time for the Twins. Going backwards was a pretty disheartening development for the top prospect, and something I assume Minnesota wanted him to work on.

When Buxton was sent back to Triple-A Rochester following the Twins August 5 contest, he had batted just .204/.257/.322 in a 45 game stretch with the big club. Over that period, he'd struck out 56 times in 152 at bats, or 37% of the time. With Minnesota's season already well down the drain a focus on plate discipline and approach on the farm seemed to be what Paul Molitor and his cronies were looking for.

The reality however, is that what took place was anything but.

Down in Rochester for just 20 games in his latest stint, Buxton owned a .257/.288/.514 slash line. He garnered hitter of the week honors after homering in four straight games, and his bat showed plenty of pop. The problem though, is that's not the kind of hitter Byron Buxton is (nor the one the Twins should want him to be). While you can criticize Minnesota for asking a corner player to hit for contact, doing so for a speedy centerfielder would be foolhardy. At his best, Buxton should be a gap hitter that sprays line drives all over the field. In Rochester during those 20 games however, he struck out a whopping 32 times while drawing just three walks. The 32 strikeouts also represented a 43% K-rate.

There's simply no other way to describe that number, other than suggesting it's unfathomably bad.

Both Rochester teammates Daniel Palka and Adam Brett Walker, who are well known as home run or bust hitters, have struck out in 42% of their at bats at Triple-A this season. Buxton surpassing even their marks is not at all a good look for a guy the Twins need to produce at the big league level. Understanding that rosters expand because of a selected date on the calendar is one thing, but Buxton did nothing to suggest he's ready to come back up.

A bigger problem here is that the scenario as a whole plays out in a way that suggests the Twins are simply guessing. Minnesota sent Buxton down presumably to get confidence back and work on not striking out. Arguably, he did neither, but has been recalled. If the goal is to acclimate him for the role that he once again will need to play for Minnesota in 2017, then why hasn't this situation been used previously?

Guys like Aaron Hicks, Oswaldo Arcia, and Kennys Vargas all could have benefited from extended big league time in a season prior to being relied upon. This year, players such as Mitch Garver, Jake Reed, and D.J. Baxendale could arguably be put in that boat. If the goal is simply to get players feet wet knowing you need them to be ready to go a year from now, using September as a welcome mat regardless of results should have been done well before Buxton.

At the end of the day, it was probably foolish to expect that the Twins would leave Buxton down on the farm. That being said, he regressed by all statistical means there, and rewarding him for it seems counterproductive to whatever plan may have been in place. Some point down the line Buxton will get it, I truly believe that. Right now though, I think he's struggling, and so are the Twins when it comes to figuring out how to fix it.
Posted by tlschwerz at 7:42 AM