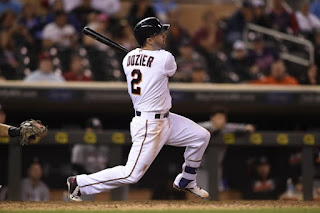 Brian Dozier is in the midst of an all time great season for a Major League second basemen. He's right on top of the 40 home run mark, and he's doing it with an increased batting average to boot. For the Minnesota Twins, Dozier has gone from fan-favorite to legitimate superstar. The next front office in Minnesota will be tasked with deciding whether or not the club makes him a part of a trade however.

While the excitement Brian Dozier has provided has been nothing short of extraordinary, it's hard to overlook the state of things for Paul Molitor's club. They will almost assuredly lose 100 games, and one most nights, competing isn't even in the realm of possibility. As has been the case for some time, pitching remains the Twins biggest struggle.

Through 139 games, Dozier owns a .278/.349/.580 slash line. His .929 OPS is nearly .200 points better than at any other point in his big league career. Minnesota's second basemen has 39 homers (sure to be eclipsed by the time you read this), and has 92 home runs. He's going to hit 40, and it's almost certain he'll drive in 100 runs. Minnesota hasn't had a player reach those plateaus since 1970 when the great Harmon Killebrew last did it.

Considering his value will never be higher, it's been a popular suggestion that now be the time the Twins part with Dozier for pitching. The reality is that he'll likely not be a significant part of the next solid Twins run, and he's their best bet to return high level assets. The question is though, is there actually a deal that would make sense?

Let's lay the groundwork for a deal here first. Dozier is owed $15 million over the next two years. While that's far from a substantial amount, the caveat is that the Twins did not buy into any of his free agent years when locking him up to the long term deal. He'll still hit the open market in 2019, albeit at the age of 32. When considering the Twins needs, any Dozier deal would need to be focused around pitching. Already chock full of position players and prospects, Minnesota needs top tier starting pitching (get in line right?). It should also be noted that I think the Twins would much prefer a young, controllable type that's already at the big league level as opposed to yet another prospect.

Knowing what the Twins would need to make a deal, there's also got to be a market analysis that takes place. Dozier is not a designated hitter, and he's not capable of playing shortstop or third base. Now, and going forward, Dozier is a second basemen. In knowing that, finding teams that either have depreciating players, or those looking to add a final top tier place at second should be most highly considered.

Immediately excluding teams with established quality second basemen, those with up and coming stars, and those too far out of relevancy to matter, here's some names I'm staring at: Chase Utley and Neil Walker. It's hard to consider players like Brandon Phillips and Scooter Gennett given the state of their respective teams. Both Utley and Walker could provide the Twins an opportunity though. With that in mind, let's explore.

At 37 years old, Utley is at the end of his career. His one-year, $7 million deal is done in the coming months, and the Dodgers will have a decision to make. He could stick around as a rotation player, and he's been better than league average this season. Los Angeles doesn't rebuild though, and Dozier could provide an immediate upgrade in an already potent lineup.

The problem is this equation is what exactly Minnesota lands in return. Clayton Kershaw is absolutely off limits, and Julio Urias might be as well. The Dodgers rotation leaves plenty to be desired and it's not exactly an area they can afford to part with pieces. If somehow Kenta Maeda comes into the equation, or Jose De Leon (a top prospect, but still) can be had, then maybe it's a spot worth pursuing.

On the New York Mets front, a perceived pitching surplus is probably less realistic than once imagine. Neil Walker ended his 2016 with surgery, and he'll be on the open market again this offseason. Sure, New York could re-sign him after his best offensive season in the big leagues. The reality though is that he'll be 31 and coming off of surgery, making him a relative question mark.

For the Mets, there are a few pitching options Minnesota could choose from. Not knowing which ones would be deemed untouchable, deGrom and Syndergaard would push the envelope the most. Both Matt Harvey and Zack Wheeler are unknowns due to injury situations, and Steven Matz is the one I can't quite peg (while also noting he's injured). When looking at the Mets farm system, there's not a pitching prospect that moves the needle enough for me to be ok with the idea of going that route either.

To summarize, I think the Twins find themselves in a situation where their current asset in Dozier, continues to be worth more to them than any other team. Asking for a one or two type pitcher is probably going to be a unenviable task given the possibilities, and settling for less due to the height of Dozier's stardom doesn't seem ideal either. There's definitely reason to believe that Dozier is a late-bloomer that could keep his production up into his mid-thirties. Right now though, he's signed for just two more years, hasn't quite found 162 games of consistency, and may have Minnesota looking for more than others are willing to feed them.

Admittedly there's more options out there than the ones I was able to come up with. No matter who the next General Manager is, a task at the top of the list should be looking at what Dozier can net the Twins. At the end of the day though, if the ask is not in line with the get, Minnesota should probably be ok holding onto their newly born superstar as well. No matter what happens, you can bet it'll be the storyline of the winter in Twins Territory.
Posted by tlschwerz at 9:32 AM