Getting Late Early For Perkins 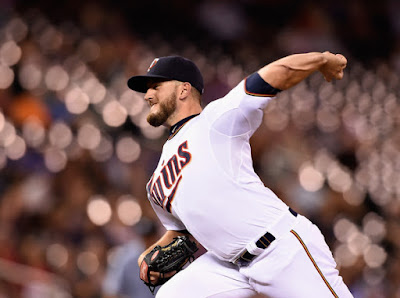 Entering into the 2017 Major League Baseball season, the Minnesota Twins might be very close to having to write off a long term organization staple. Glen Perkins is currently working his way back from shoulder surgery, and if his labrum issues weren't concerning enough, the sum of all parts presents plenty of reason for pause.

After being name an All-Star for the third straight season in 2015, Perkins went on to post a 7.32 ERA across 19.2 innings the rest of the way. He recorded just four saves as the Twins closer while blowing three, and he allowed opposing hitters to compile a 1.068 OPS off of him. It didn't get any better in 2016, but a two inning sample size is hardly anything to note here.

What's become apparent is that Perkins hasn't been healthy for quite some time, and his output has been lackluster at best. Never an incredibly hard thrower, Perkins was installed as Minnesota's full time closer in 2013. His fastball registered at 95.2 mph that season and his slider had solid bite clocking in at 84.4 mph. Yearly decline has take place since, and over the very small body of work in 2016, both pitches had dipped to 91.4 and 80.4 mph respectively (down from 93.7 and 82.2 in 2015).

Not just a velocity issue, Perkins has also struggled to retain consistent effectiveness. In 2013, he was giving up contact 74.6% of the time. Fast forward to 2015 and that number was bordering 80% at 79.8%. He has also seen a consistent dip in swinging strike rate, falling from 13.1 % in 2013 down to just 11.0% in 2015. For a guy that got hitters out more on his acumen than just his stuff, Perkins has watched it all deteriorate rather exponentially.

Looking ahead to 2017, it all adds up to the Twins having some serious questions to answer. There's probably less than a 5% chance that Perkins is ready Opening Day, and his absence will more than likely be felt into the summer. In 2016, it was Brandon Kintzler he filled in as closer, but a 32 year-old veteran owning a 5.8 K/9 probably isn't a good bet to put up a repeat high-leverage performance.

The closer role is a fickle beast, and over the course of the Postseason, I noted that relief pitching is more about using your best arms when you need them most. For Minnesota though, the pen is going to be filled with a lot of youth, and some significant unknowns. Ryan Pressly could potentially fit the bill as a 9th inning guy, and J.T. Chargois has that background from his college and minor league days. Right now though, there's no slam dunk in house replacement for Perkins.

I think the bigger picture here isn't who takes over when the Twins are leading in the 9th, but rather that Minnesota is going to be closing the chapter on a key cog of their relief corps. No matter when he returns, Perkins effectiveness is something that can't be counted upon. Whatever positive performance you get from him should be looked upon as a massive victory. Having stretched his career after failing as a starter, the lack of plus velocity combined with health concerns is likely going to end his big league career prior to even his desires.

There's still a part of me that wonders what if the Twins had capitalized on Glen Perkins at his peak. When the San Diego Padres traded veteran closer Huston Street to the Los Angeles Angels, Minnesota had an opportunity. They passed on it, Perkins gave them two years of All-Star caliber play in lost seasons, and now may be ready for his exit.

Injuries stink, and career derailing ones are even worse. Perkins has been trending this direction for some time though, and 2017 could force the Twins to finally start to consider other alternatives.
Posted by tlschwerz at 7:47 AM