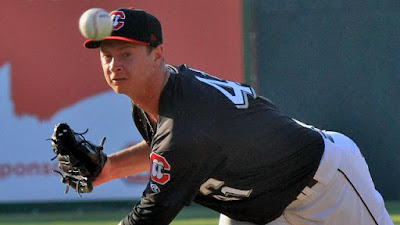 A year ago, the Minnesota Twins had one of the best farm systems in all of baseball. There was a ton of top tier talent, and the bulk of it was near major league ready. Miguel Sano had paved the way by making his debut in 2015, and there was plenty of youth on the way to the Twin Cities to join him. This season, the Twins won't have quite that level of prospect talent, but there's reinforcements on the way.

Prior to free agency getting underway, and the Twins shaping their 40 man roster for the 2017 season, I wanted to take a look at what internal options Paul Molitor should have. Of the eight players I named last season, four of them made their major league debuts. Here's to hoping I hit on a bit higher than 50% this time around.

A repeat from last year, I expected Reed to debut in 2016. Unfortunately he had a slow start at Double-A and couldn't get things consistently going in his favor. The command issues persisted for him at Chattanooga while he walked 3.3 per nine. His strikeout rate jumped to 9.6 per nine, which was a nice boost. A strong finish to the season had him promoted to Triple-A for just over 10 innings, and he was worthy of a September call up. Of the Twins relief options heading into 2017, it should be Reed who's called upon to provide a boost first.

Another 2016 holdover, Burdi threw just three innings last season. Dealing with a spring training fluke injury, and then arm injuries throughout the year, it was essentially a lost campaign. Burdi brings the heat and can touch 100 mph when healthy. Minnesota will need to make sure his arm is in good shape early this spring, and you can bet that they'd like to have him in the big leagues sooner rather than later. Burdi's younger brother Zack was a first round pick last season by the White Sox and is already at Triple-A; you can bet there might be a little family rivalry to see who can get to The Show first.

The next pitcher on the list of starting prospects the Twins need to pan out is none other than the 2016 Minor League Pitcher of the Year. Pitching at both High-A Fort Myers and Double-A Chattanooga, Gonsalves dominated each level. His 10.0 K/9 was very strong, and while his 3.7 BB/9 number isn't ideal, it was inflated by some clunker outings. His stuff isn't as electric as that of Berrios, and he profiles as more of a middle-of-the-rotation starter, but after a brief time in Triple-A to start 2017, he should be at Target Field by the middle of the summer.

Hildenberger is one of the more interesting names on this list. He's 25 and not a top 100 prospect, but he's one of the better relief arms in the Twins system. He doesn't throw quite as hard as Burdi and Reed, but working as the Double-A closer in 2016, he was about as sure of a thing as it gets. Throwing 38.2 IP in 2016 for Chattanooga, Hildenberger struck out 10.5 per 9 walking just 1.4 per nine. He was shut down with an injury to end the year, but could've made the jump from Double-A to the big leagues. Not currently on the 40 man roster, Hildenberger should be added soon and can provide some punch down the stretch.

The Twins, are least the former regime, definitely see something in Melotakis. He was added to the 40 man roster in 2016, and was sent to pitch in the Arizona Fall League this year. After missing 2015 due to injury, Melotakis pitched all of 2016 at Double-A Chattanooga. In 33.1 IP he struck out 11.3 per nine. Minnesota needs more strikeout types out of the pen, and Melotakis looks like he could be just that. At 25, he's on the verge of getting up there in age, but if he can show well early in Triple-A, he should find himself in the big league clubhouse to end the year.

In regards to Jay, there's a couple different ways that 2017 could go, and a lot will depend on how Derek Falvey and Thad Levine view the former first round pick. He was exclusively a reliever in college, and his transition to a starter has been a process. Jay will almost certainly begin 2017 at Double-A and should finish the year at Triple-A. If starting doesn't work out or the Twins need him sooner, Jay could definitely be used out of the pen almost immediately.

Suggesting that Garver doesn't see the big leagues until September comes with a significant disclaimer; the assumption being that Minnesota signs or trades for a starting catcher prior to 2017. Garver should've seen his debut last September, and he had significantly more purpose being a big leaguer than Juan Centeno did a season ago, but he was skipped over. Should a new starting backstop come into the fold, Garver is likely going to have to overtake John Ryan Murphy for backup duties, and will likely spend the bulk of the year at Triple-A. He's solid defensively, has a good arm, and is coming off an .815 OPS in his first 22 Triple-A games. I'd like to see Garver get his chance sooner, but acquisitions could prevent that.

Zack Granite- First One Out

Maybe the most unknown commodity on this list, Granite is far from one to be overlooked. He was the Twins Minor League Hitter of the Year and put up a career best .729 OPS at Double-A Chattanooga. He's not flashy at the plate, but his speed and defense will play at any level. In 127 games. he swiped 56 games and ripped off eight triples as well. For a big league club that has employed the likes of Shane Robinson and Robbie Grossman as 4th outfielders the past few years, Minnesota would be hard-pressed to do worse than their own internal speedster.

As noted above, this list might not have the top 100 prospect types that the 2016 version showed off, but there's a lot of big league talent here that can make an impact in an organization looking for difference makes.
Posted by tlschwerz at 7:57 AM